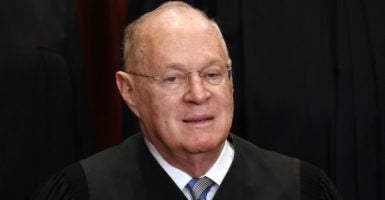 "Religious and philosophical objections to gay marriage are protected views and, in some cases, protected forms of expression," wrote Justice Anthony Kennedy about the Jack Phillips case.(Photo: Olivier Douliery/CNP/AdMe/SIPA/Newscom)

This is a lightly edited transcript of an interview on The Daily Signal podcast, where we talked with The Heritage Foundation’s Emilie Kao about why she thinks the Supreme Court ruling in the case of Jack Phillips will “lead other courts to protect people who have the same view of marriage that Jack Phillips has,” thanks to a statement by Justice Anthony Kennedy.

Katrina Trinko: On Monday, the Supreme Court, in a 7-2 ruling, ruled in favor of Jack Phillips, the Christian baker who didn’t want to make a wedding cake for a same-sex couple. Phillips had been fighting a legal battle for years on this, and even had to deal with a government official in Colorado comparing him to the Nazis for his decision on this. He talked to The Daily Signal last year about that.

Jack Phillips: One of the commissioners on the Colorado Civil Rights Commission called religious freedom despicable rhetoric, and compared not making a cake to slavery and the Holocaust. That was particularly offensive to me because my dad fought in World War II. He landed on Omaha Beach in Normandy. He fought across France. He fought across Germany. He ended up being part of a group that helped liberate Buchenwald concentration camp. And for her to compare not making a cake to the Holocaust, knowing what my dad went through, is just ludicrous and personally offensive.

Trinko: Well, joining us today is Emilie Kao, director of the DeVos Center for Religion and Civil Society at The Heritage Foundation. Emilie, can you break down for us the decision and the legal grounds on which Jack won?

Kao: Yes, well, the court got it right. They protected Jack Phillips’ First Amendment rights, particularly based on free exercise of religion. They said that the Colorado Civil Rights Commission acted with hostility towards his religious views when they decided that he could not decline to create a custom wedding cake expressing a message in support of same-sex marriage.

The court clearly understood that there is a difference between real anti-gay bigotry and disagreement on marriage.

And fortunately, they upheld the view of all Americans who believe in traditional marriage, that marriage is between one man and one woman. The court said that, “Religious and philosophical objections to gay marriage are protected views and, in some cases, protected forms of expression.”

Daniel Davis: Emilie, you talked about how the court went after the Colorado commission for hostility—to use the word that the court used—anti-religious hostility toward his views. And that’s, obviously, something that the state is not allowed to do. Does this now go back to the commission? What happens next? Does Jack basically get a do-over?

Kao: Fortunately, the court reversed the decision so this is not going to be a do-over. The decision is overturned, and so, Jack should now be able to operate his business and continue living his life according to his religious beliefs. He should be allowed to continue making cakes for weddings, and for other occasions, according to his beliefs, and to be able to decline weddings for same-sex ceremonies.

>>> The Daily Signal podcast ia a 25-minute podcast that shares the news highlights conservatives need to know and features one in-depth interview each weekday. Subscribe on iTunes, or SoundCloud.

Trinko: I think he told Kelsey Harkness of The Daily Signal that he had lost 40 percent of his business, and I think at one time he said he’d lost $100,000 because he stopped making these wedding cakes because he couldn’t do it without being forced to make gay wedding cakes.

But Emilie, I wanted to ask you—and Daniel sort of touched upon this—a lot of people are saying this is a very narrow ruling. It has implications for Jack Philips but not for all these other religious liberty cases that we’ve seen really affecting a range of professionals. So, what is the deal with that? Will this have any implication on others’ religious liberty cases?

Kao: I think it’s really important that in the decision that Justice Anthony Kennedy wrote that he said, again, “Religious and philosophical objections to gay marriage are protected views and, in some cases, protected forms of expression.”

I think that the statement from Kennedy is a pretty strong one and it should lead other courts to protect people who have the same view of marriage that Jack Phillips has.

Again, I think it’s really important to understand that Jack Phillips served all people for 24 years, including gay people. He still has continued to do that throughout the course of this litigation, which has gone on for several years, and that’s never been the issue.

It’s not that he doesn’t serve gay people. It’s that he declines to create cakes for certain, specific messages celebrating specific occasions, and that’s all about his views on marriage. That’s not about discrimination.

Davis: Emilie, something that was interesting in this ruling, there were several other people who refused to bake cakes, but sort of for the opposite reason, right? In Colorado, bakers who were asked to make anti-gay messages on cakes, or at least messages that disagreed with same-sex marriage, and those cake bakers felt otherwise and they were allowed to decline to make those cakes.

Wasn’t that a key part of this ruling? The court’s saying, “Well, if you let those people follow their conscience, then you need to let Jack follow his conscience.”

Kao: That was a very interesting part of the case and it’s addressed extensively by Justice Neil Gorsuch in the concurrence that he wrote. Justice Gorsuch sort of saw through the logical errors that were made by the lower courts in Colorado.

Basically, it’s a question of identity versus the message. With the three bakers who were asked to create cakes that were disapproving of same-sex marriage, and when they declined to do so, the Colorado Civil Rights Commission said, “Oh, well, that’s OK, you’re just declining it because the message is offensive.” They did not see that as identity-based discrimination.

And, keep in mind that the two men came in with the mother of one of the men. So, she’s there. She’s a heterosexual. He’s denying the cake to her because it’s not about who they are. It’s about the message. Gorsuch saw clearly that this was a double standard and he called it out.

Trinko: On a somewhat similar note, we’ve seen a real push among the LGBT activist community to try to push these anti-discrimination laws, and that’s something that your center has worked a lot on. They’re called sexual orientation and gender identity policies and often, the implication is that those who disagree with same-sex marriage on religious or any other sincerely held beliefs grounds could be affected.

Could you speak a little bit about these kind of policies and laws, and the long-term implications for Americans who don’t agree with same-sex marriage?

Kao: Well, I think Ryan Anderson, our colleague in the DeVos Center, has written really eloquently about this, and he wrote an amicus brief in this case to the Supreme Court, specifically addressing the difference between discrimination against African-Americans and whites who wanted to marry, and these cases, because there is no reason to keep people of two races from marrying one another, and there are many reasons why you would want to have man and women joining in marriage.

I think what’s really interesting about the way that the sexual orientation and gender identity categories are being added to the civil rights laws that came out of the civil rights movement, the anti-discrimination laws.

It’s really important for people to understand that the reason why the original anti-discrimination laws were needed was because African-Americans were systematically denied access to basic goods and services. They couldn’t gain entry into movie theaters and restaurants and hotels, and that was legal in many states.

And that was under Jim Crow. And so, there needed to be a legal remedy for that problem, but in this case, when the LGBT movement is trying to pass the sexual orientation and gender identity laws, it’s not about economic access because they don’t have problems with economic access.

It’s all about punishing the view of marriage that Tim Gill, again, has described as his effort to punish the wicked.

Trinko: Could you fill in for our listeners who aren’t studying these issues all the time who Tim Gill is?

Kao: Tim Gill is an extremely wealthy tech entrepreneur in Colorado who has donated over $400 million to the Human Rights Campaign, and to other LGBT organizations to try and pass sexual orientation and gender identity laws in the states.

And so far, they’ve passed in 21 states and the District of Columbia. They’re continuing to try and pass these laws, right now in Ohio and Pennsylvania. He said in Rolling Stone magazine last summer that the purpose of these laws is really, in his mind, to “punish the wicked.” And the wicked, in his mind, are those who believe in marriage between one man and one woman.

Davis: Really showing that the motivation for it is not to enable, as you’re saying, access to the same services—it’s just to punish those who disagree. Do you think courts will use that rationale? Very often, as you know, courts will look to the rationale, if it’s been stated, to kind of interpret why laws exist. Do you think the courts will look to that statement and say, “Well, some of these laws are based on really an animus against people who hold a certain position?”

Kao: Yes, I think it’s important for the courts to look at the legislative history of these laws, and the intent behind them. I hope that the courts will look at what has been said about why the LGBT movement is trying to pass these laws.

Trinko: OK. Well, thank you so much for joining us today, Emilie.