British Conservatives Are Growing Weary of Their Own Leaders 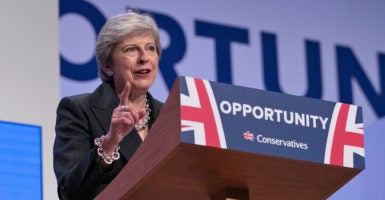 The annual party conference of the British Conservative Party wrapped up Wednesday in the city of Birmingham.

It’s been years—almost 20 years, in fact—since Conservative Party conferences were actually a genuine meeting of party members. Over those years, the conference has been more and more tightly controlled, with lobbyists and companies taking the place of actual conservative voices.

The result has been that fewer of those conservatives find it useful to attend the conference, and those who do show up don’t go to the ministerial speeches that are supposedly its centerpiece.

This year, the empty seat problem was worse than ever, with even heavy hitters like Michael Gove, the environment minister, finding it hard to fill more than the first few rows.

The big draws were Boris Johnson—the biggest personality in British politics, who resigned several months ago as foreign secretary to protest the government’s handling of Brexit—and Jacob Rees-Mogg, a Conservative member of Parliament who has a remarkable gift for standing up to the left, staying calm, and saying sensible things clearly.

The crowds did turn out for the prime minister, Theresa May, and her speech demonstrated the best of her qualities: perseverance.

But even more than in previous years, the biggest draws of all were the fringe events—the panels and speeches by free-market and conservative groups organized separately from the main program of speeches.

Almost no one turned up to hear about government policy on the environment, or drugs, or sports, or the media—but hundreds filled the side halls to cheer for free trade, to back Brexit, and to support a U.S.-U.K. free trade agreement.

It’s not that the Conservative government has no ideas at all, but many of them are small-ball. And some, like making foreigners who want to buy a house in the U.K. pay higher taxes, only sound good if you don’t think too hard.

It’s all well and good to say that a house bought by a foreigner is one not bought by a Briton—but it’s also true that a rich foreigner is less likely to live in and invest in Britain if he has to pay over the odds for his house. Nor is it clear why someone who is employing British workers should have to pay more for a house just because she’s a foreigner.

And then there is the core problem, which is that the government’s plan for Brexit has been roundly rejected by the European Union, and is hated by virtually every member of the party who is not in the Cabinet.

The prime minister’s virtues—above all, her perseverance and her skills as a manager of the process—are ill-suited for a time that calls for big ideas. The natural result is that think tanks are taking the initiative to fill the gap between what the Conservative government is offering and what British Conservatives want.

In a way, that’s a good thing. This is a time when young ministers with ideas can get things done and build a reputation, and it’s a time when a system that is not much interested in ideas at the top can be seeded with them from below.

Couple this with the fact the Conservative Party is raising large amounts of money—thanks to the threat of the Labour Party, which keeps heading further left and deeper into anti-Semitism—and British Conservatives might be on the verge of a revival.

But at the moment, what the conservative government is failing to deliver is simple: conservative policies. And that is what Conservative Party members want.

The prime minister’s speech at the conference was effective in large part because it was actually a conservative speech (“her first one ever,” one activist joked to me). But speeches only get you so far. When everyone returns to politics as usual next week, the same problems that have vexed the government for the past year—above all, about Brexit—will still remain unsolved.

As a result, it’s almost universally accepted here that by this time next year, May will be a former prime minister. Expectations like that have a way of fading, but today, May is simply not delivering on either the substance or the style that her party demands.

And in British politics, it’s easier to fix that problem than in the U.S. The party can change its leader while retaining—usually—its governing majority.