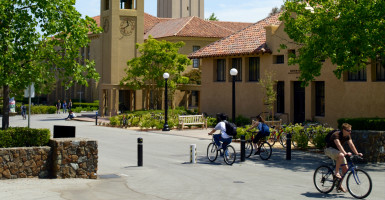 “We hope to get a positive vote to push the faculty ... to discuss seriously the need for a civilization requirement," a Stanford University student says. (Photo: picturescolourlibrary.com/Stock Connection USA/Newscom)

Some millennials might be spurring a comeback of Western civilization at one of the nation’s premier universities.

Stanford University students will vote April 7 and 8 on whether to reinstate a two-quarter Western civilization requirement after the success of a campus-wide campaign.

In accordance with Stanford’s commitment to educating its students, and in recognition of the unique role Western culture has had in shaping our political, economic, and social institutions, Stanford University should mandate that freshmen complete a two-quarter Western civilization requirement covering the politics, history, philosophy, and culture of the Western world.

After gaining over 370 signatures, it qualified to be featured in the Associated Students of Stanford University elections ballot.

Harry Elliott, editor-in-chief of The Stanford Review, told The Daily Signal in an email that their efforts have “already accomplished the first meaningful discussion on Stanford’s humanities core in years.”

Two campus discussion events about the initiative, including one led by university faculty and students, were held on campus earlier this month.

Elliott said the array of courses offered to fulfill the university’s Thinking Matters undergraduate requirements has created a “race to the bottom.” The 2015-16 catalog lists courses such as “Food Talks: The Language of Food” and “The Science of Mythbusters.”

“I was lucky enough to be selected for Structured Liberal Education, a year-long residential humanities program teaching the Western canon; I think all students should be afforded that opportunity,” Elliott, an economics major, said.

Even if a vote is successful, the initiative would still require faculty approval.

“We hope to get a positive vote to push the Faculty Senate to discuss seriously the need for a civilization requirement, and the reasons the student body want that requirement to be focused around the West,” Elliott said.

Elliott says he has “had a number of people in person thank me for bringing this discourse to Stanford, but also a number of fairly unpleasant encounters, in the last few weeks.”

In an opinion piece published by The Stanford Daily, Mara Chin Loy claims that the initiative “actively participates in my dehumanization and the dehumanization of my communities.” Loy is an undergraduate student at the university and self-described “social activist.”

“We don’t need to learn about Western civilization and its ideals, because we have spent every moment of our lives resisting and fighting to live and love ourselves, so that we can transcend Western values,” Loy wrote.

A Stanford Review editorial claims that a “common civilization requirement” is essential for students if they wish to understand the society in which they live.

Social awareness arises from a common set of values and norms. Societies neither function nor prosper without shared beliefs, values, or customs. Even if one disagrees with these principles and traditions, reform cannot occur without understanding the historical context in which they arose.