‘I Took Control’: Sessions Punches Back After Latest Trump Criticism 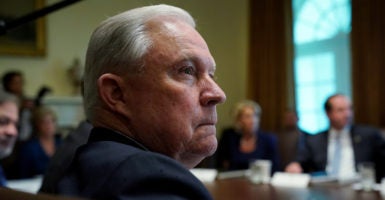 Sessions issued a statement after the airing of an interview with Trump on Fox News Channel in which the president said the attorney general “never took control of the Justice Department.”

Sessions seemed to respond directly to Trump’s critique, saying in the statement:

I took control of the Department of Justice the day I was sworn in, which is why we have had unprecedented success at effectuating the president’s agenda—one that protects the safety and security rights of the American people, reduces violent crime, enforces our immigration laws, promotes economic growth, and advances religious liberty.

“While I am attorney general,” Sessions said, “the actions of the Department of Justice will not be improperly influenced by political considerations.”

Sessions has been on the front lines of helping to enforce immigration law as well as implement tough-on-crime policies.

However, in interviews and tweets over the past year, Trump consistently has criticized the former Alabama senator—a key early supporter—for recusing himself from the Justice Department’s investigation of Russian election meddling and alleged Trump campaign involvement.

A federal jury on Tuesday convicted a former Trump campaign chairman, Paul Manafort, on charges of tax evasion and bank fraud. Mueller’s team prosecuted the case, but the charges were not related to Russian meddling in the 2016 presidential campaign.

On the same day, Trump’s former personal lawyer, Michael Cohen, pleaded guilty to a felony violation of campaign finance law, implicating Trump. The Mueller team did not prosecute the Cohen case but turned it over to New York-based federal prosecutors.

During Trump’s Fox News interview, he said: “Jeff Sessions never took control of the Justice Department, and it’s a sort of an incredible thing.”