After the Final Debate, Americans Need to Know 3 Things About Their Taxes

Trump Responds to Dire Predictions in the Latest US Climate Report 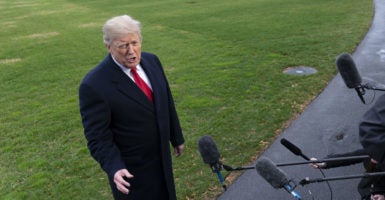 “I don’t believe it,” Trump said when asked by a reporter outside the White House on Monday if he agreed with the latest National Climate Assessment (NCA) report’s projections that global warming could hurt the U.S. economy.

“And here’s the other thing—you’re going to have to have China, and Japan, and all of Asia, and all of these other countries—you know, it—it addresses our country,” Trump said.

BREAKING: "I don't believe it."

President Trump passively rejects the findings of the major new US government multi-agency report that says climate change will wallop the US economy in years to come. https://t.co/YdptYPKn20 pic.twitter.com/hJx7IA0S5F

“Right now, we’re at the cleanest we’ve ever been, and that’s very important to me. But if we’re clean but every other place on Earth on is dirty, that’s not so good,” Trump said. “So I want clean air. I want clean water—very important.”

The Trump administration released the NCA Friday, launching a wave of media coverage on the report’s dire predictions. The report claims that “global greenhouse gas emissions is expected to cause substantial net damage to the U.S. economy throughout this century,” including a 10 percent hit to gross domestic product in one extreme scenario.

Major media outlets, including The New York Times, highlighted the potential economic damages under the most extreme global warming scenario.

“All told, the report says, climate change could slash up to a tenth of gross domestic product by 2100, more than double the losses of the Great Recession a decade ago,” The New York Times reported of the NCA.

However, that figure is based on a study funded by groups founded by two major Democratic donors and environmental activists—former New York City Mayor Michael Bloomberg and San Francisco billionaire Tom Steyer.

That study only found substantial damage to the U.S. economy under an extreme global warming scenario of 15 degrees Fahrenheit by 2100—twice the United Nations’ worst-case scenario called RCP8.5.

Even Trump is occasionally right. https://t.co/51lWw7js9y

Experts have increasingly called into question the usefulness of projecting future warming based on the RCP8.5 scenario since it’s based on “systematic errors in fossil production outlooks.”