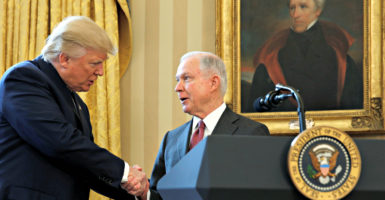 President Donald Trump congratulates Jeff Sessions as he is sworn in as attorney general Feb. 9 in the Oval Offfice. (Photo: Kevin Lamarque/Reuters /Newscom)

Immigration hawks and law enforcement—two key elements of the coalition that helped elect Donald Trump as president—rushed to the defense of Attorney General Jeff Sessions on Tuesday, as Trump continued his public criticism of an early political ally.

“We will see what happens. Time will tell,” @POTUS says.

Trump could face grave political consequences if he fires Sessions over his frustration with a special counsel’s expanding Russia investigation, said Mark Krikorian, executive director of the Center for Immigration Studies.

“This would do broad and long-lasting harm to the Trump administration,” Krikorian told The Daily Signal.

“Other Cabinet officials would wonder if he would do this to Jeff Sessions—his original supporter—what will he do to us?” Krikorian said.

As a conservative U.S. senator from Alabama and former state and federal prosecutor, Sessions gave important early backing to Trump that was a rare show of respect from a Washington fixture when many politicos wrote off the celebrity businessman and developer.

In the Senate, Sessions routinely sought to hold the line on illegal immigration and its costs to American taxpayers, helping block amnesty proposals promoted by both President Barack Obama and President George W. Bush.

The president especially could irk social conservatives, opponents of illegal immigration, and law enforcement officers if he pushes Sessions out.

“Attorney General Sessions has proven beyond any doubt his commitment to enforcing the law, and particularly the immigration laws that have been neglected for decades to the detriment of American workers,” said Rosemary Jenks, director of government relations for NumbersUSA, a group that favors more restrictions on legal immigration. Jenks added:

He has spent his entire career standing up for working-class Americans and the rule of law. There is no one more dedicated to President Trump’s agenda of making America safe again, and there is no better choice for our top law enforcement officer, than AG Sessions.

During a press conference Tuesday in the Rose Garden, Trump repeated some of the criticism of Sessions he made in a interview last week with The New York Times, and in tweets Monday night and Tuesday morning.

“He should not have recused himself [from various Russia probes] almost immediately after he took office,” Trump said of Sessions, speaking to reporters in the Rose Garden at the White House. “If he was going to recuse himself, he should have told me prior to taking office, and I would have quite simply picked somebody else. So I think that’s a bad thing, not for the president but for the presidency.”

On Feb. 9, Sessions was sworn in as attorney general. On March 2, he recused himself from the Justice Department’s investigation into Russian meddling in the 2016 presidential campaign, citing his involvement in the Trump campaign.

Trump declined to answer a question about when he might decide about keeping Sessions, who has said he plans to stay on as attorney general.

“I want the attorney general to be much tougher on the leaks from intelligence agencies, which are leaking like they rarely have ever leaked before,” Trump said later.

The president added: “I told you before I am disappointed with the attorney general, but we will see what happens. Time will tell.”

So why aren’t the Committees and investigators, and of course our beleaguered A.G., looking into Crooked Hillarys crimes & Russia relations?

Ukrainian efforts to sabotage Trump campaign – “quietly working to boost Clinton.” So where is the investigation A.G. @seanhannity

Trump rallied support from law enforcement officers and organizations during the presidential campaign.

The National Sheriffs’ Association, representing the nation’s 3,000 sheriffs, was quick to defend Sessions.

“It is precisely his listening and responsiveness that continues to reinforce our support for Attorney General Sessions,” Jonathan Thompson, the group’s CEO, said in a formal statement.

The president’s public criticism of his attorney general unsettles Republican senators, whom Trump is counting on to pass a health care bill and overhaul the tax code. Among those defending Sessions are a conservative, Mike Lee of Utah, and a centrist, Lindsey Graham of South Carolina.

Although there are issues where I disagree with AG Sessions, he is a man of integrity. He has led DOJ in positive direction. pic.twitter.com/hNAP4NHSoa

Jeff Session is a rock-solid conservative, but above else he believes in the Rule of Law. He understands we are a nation of laws, not men. 2

The leader of one of the nation’s best-known defenders of traditional values and religious liberty, Family Research Council President Tony Perkins, also defended the attorney general.

“Attorney General Jeff Sessions has in a very short time restored the Justice Department’s reputation as one that upholds the law—not circumvents or undermines it,” Perkins said in a prepared statement, adding:

He has ushered in a new era at DOJ—one that cherishes the Constitution and its protection of our freedom from government oppression. If there’s one thing we know about the attorney general, it’s that he understands the importance of all of our God-given rights, respects the law, and is making tremendous progress to restore our nation to greatness.

Although some conservatives and legal scholars agree with Sessions’ decision to recuse himself from the Russia probes, Trump could have a legal argument that Sessions did not have to do so, said Robert Ray, a New York lawyer who, as an independent counsel, investigated President Bill Clinton.

But, Ray said, ousting Sessions would be politically complicated.

“Certainly the simple answer is to replace him with someone who was not in the campaign or in any way associated with Russia,” Ray told The Daily Signal. “As a political question, it is more difficult for the president to fire Sessions than to receive his resignation.”

Ray said it would be controversial, but would take only 49 of the 52 Republican senators plus Vice President Mike Pence to confirm a new attorney general eventually.

As controversial as Trump’s firing of FBI Director James Comey was, the confirmation process for Christopher Wray as his replacement has been relatively smooth, as he easily won approval from the Senate Judiciary Committee, Ray noted.

“Conservatives feel strong about Jeff Sessions and he’s done a good job moving to prosecute MS-13 and enforcing mandatory minimums [in sentencing],” Ray said. “But I don’t know if this is where conservatives lay down the gauntlet.”

MS-13 is a violent international criminal gang with roots in El Salvador that originated in California and spread to larger cities across the United States and into Central America.

But enforcement of immigration laws, arguably the keystone of Trump’s campaign, would be set back, said Ira Mehlman, spokesman for the Federation for American Immigration Reform, a pro-enforcement group.

Immigration hawks are worried that Tump has moved too slowly on related issues such as implementing E-Verify, proposing enough funding in his budget to construct a border wall, and reversing the Obama-era program called Deferred Action for Childhood Arrivals, or DACA.

“The president might not be in the White House if not for Jeff Sessions helping to craft his immigration policy,” Mehlman told The Daily Signal. “Immigration was instrumental in Trump winning the nomination and the election. … If firing James Comey was explosive, just see what happens if he fires Jeff Sessions.”

Sessions also redirected the Justice Department toward crime fighting, said Ken Blackwell, a former Ohio secretary of state and Trump transition team member who is on the Presidential Advisory Commission on Election Integrity.

“General Sessions’ policies are keeping America safe, just as the president promised the American people his administration would do,” Blackwell said in a Facebook post, adding:

Under his leadership, the DOJ has followed the law and put in place policies to crack down on illegal immigration and sanctuary cities. Additionally, General Sessions and the DOJ are coming down hard on violent criminals [who are] ravaging our cities, and on gangs that are infiltrating communities across America.

"As someone who has worked with Attorney General Sessions most recently on President Trump's transition team, I cannot…

Sen. Ted Cruz, R-Texas, Trump’s leading opponent at the end of the GOP primary season, denied rumors that Trump was considering him to replace Sessions.

“He has been one of the strongest and most consistent allies we have and [I] can think of no better person to serve as President Trump’s attorney general,” Martin said in a public statement. “Jeff Sessions has stood with Tea Party Patriots against the lawlessness of the Obama administration when they refused to enforce our immigration laws. We are confident that AG Sessions will continue to uphold the rule of law and ensure all of our laws are enforced.”