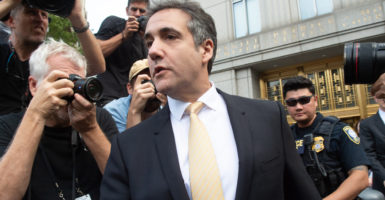 A guilty verdict in Northern Virginia didn’t implicate President Donald Trump, while a guilty plea in Manhattan did implicate the president, but it could be difficult to prove he did anything wrong, legal experts said.

Still, they agree the two events in court this week could mean trouble for the president, although they differ on how much trouble.

The more direct problem for Trump, however, is that a former personal lawyer, Michael Cohen, implicated him in what prosecutors called a campaign finance violation.

Here’s a look at what could be next.

1. What Does This Mean for the Mueller Probe?

Both cases could mean a lot for special counsel Robert Mueller’s investigation, officially centered on Russian interference with the 2016 presidential election and any involvement by the Trump campaign.

Mueller secured his first jury verdict with Manafort’s conviction on eight counts, even if the case was outside the original parameters of his investigation. The jury could not reach a decision on 10 other counts, also unrelated to Russia, prompting the judge to declare a mistrial on those charges.

The U.S. Attorney’s Office for the Southern District of New York brought charges against Cohen, not Mueller’s team.

However, Cohen lawyer Lanny Davis—longtime counsel to Bill and Hillary Clinton—said Tuesday that his client has information that Mueller’s investigators would be interested in.

A former prosecutor believes this could be significant.

“Manafort and Cohen are completely unrelated to the mission of investigating collusion with Russia,” Coffey said, “but it’s damaging in the court of public opinion and signals the Department of Justice is moving aggressively against the president.”

It’s not likely Manafort would have let his case go to trial if he had anything to offer prosecutors on Trump, Coffey said. So, the Cohen case is the one to watch.

2. Does This Increase Prospects for Impeachment?

Mueller’s investigation has yet to allege, much less prove, collusion between Trump’s campaign and Russians in the 2016 campaign cycle. But the allegation that Trump worked with one of his lawyers to violate a federal campaign finance law is the first quantifiable accusation of a crime.

“Mueller’s final report draft will likely find that the president was implicated in a federal crime, if the report finds any crime at all,” Coffey said. “What would Democrats do with that? A number are already running on a platform of impeachment.”

Coffey and other lawyers strongly question whether accusations of hush money paid to two women who claim to have had affairs with Trump would qualify as violations of campaign finance law.

The first allegation of an actual crime—even a campaign finance violation—could provide a political and legal template for members of Congress already hoping to impeach Trump, said Robert Ray, a former independent counsel.

Ray took over Ken Starr’s investigation of President Bill Clinton and secured an agreement with the outgoing president to surrender his law license over evasive testimony regarding the Monica Lewinsky matter.

“There has been a concerted effort to try to find cause for impeachment,” Ray told The Daily Signal, adding:

If Democrats control the House, they would likely use this as a charge. My guess is that there wouldn’t be public sentiment to support it. That would take high crimes and misdemeanors from the Russia investigation, which we don’t have evidence of yet. But impeachment is not a legal decision, but a political decision.

It takes only a simple majority in the House to adopt articles of impeachment against a president. However, it take a two-thirds majority of the Senate, or 67 senators, to remove a president from office.

In 2013, the Federal Election Commission fined President Barack Obama’s 2008 campaign $375,000 for failing to timely and properly report on $1.8 million in donations.

In his guilty plea Tuesday in U.S. District Court for the Southern District of New York, Cohen stated that then-candidate Trump told him to coordinate payments to two women during the 2016 presidential race to keep them from publicizing past sexual relationships with Trump.

Trump has denied having an inappropriate relationship with either woman.

Both payments could be construed as an in-kind campaign contribution well in excess of the $2,700 limit in federal law, because keeping these matters quite arguably helped the Trump campaign.

Prosecutors were lucky to get a guilty plea from Cohen, because otherwise it would be a tough case to take to court, said Hans von Spakovsky, a former lawyer with the Federal Election Commission.

“I believe the Justice Department would have a hard time prosecuting any such claim; in fact, I think they would lose because it was not a campaign-related expense,” von Spakovsky, now a senior legal fellow with The Heritage Foundation, told The Daily Signal. “They tried to make this case when they prosecuted John Edwards and they lost.”

Prosecutors failed to convict Edwards, a former North Carolina senator and two-time Democratic presidential candidate, on campaign finance charges stemming from supporters’ paying $1 million to a woman with whom he had an extramarital affair.

The unsuccessful prosecution of Edwards, Democrats’ nominee for vice president in 2004, is relevant to the Cohen-Trump matter, Coffey said.

“The John Edwards case was widely criticized at the time by legal analysts, and it was a humbling defeat for the Justice Department on a discredited theory,” Coffey said, adding:

Campaign money going for private purposes is a well established violation of the law. Private money going to private matters that might pertain to the campaign is a bigger reach. But, putting yourself in the position of Michael Cohen, his plea deal was focused on limiting his prison exposure, not on sound legal theory.

The Trump Organization reimbursed Cohen for the payment to Stormy Daniels. As an individual, Trump could spend on his own campaign, but could have to report an expenditure such as paying Daniels as a campaign expense, Ray said.

“Lanny Davis says if Cohen violated campaign finance law, then so did Trump,” Ray said. “Michael Cohen was Trump’s lawyer. Donald Trump has the right to rely on legal advice of counsel, which he could say he was doing in this case.”

As was the case in the failed Edwards prosecution, tying payments directly to the campaign is a problem. But the timing is certainly bad, Ray said.

“The problem for the president is that the payments were made in October,” he said. “The intent was to silence these women to have no impact on the campaign. That could still be a long way from facilitating breaking campaign finance laws.”

4. Does Cohen Have More to Offer?

Cohen’s guilty plea didn’t include a cooperation agreement with federal prosecutors in New York. But that’s likely part of the strategy by prosecutors, Coffey said.

“It’s officially not a cooperation agreement. It is an agreement between the prosecution and the defendant to negotiate specific charges—especially charges leveled at the president—that agrees with the prosecution’s theory, to limit his prison time,” Coffey said.

Ray said he has his doubts.

“If he’s had something to cooperate with, I’m surprised Mueller would let him go to [prosecutors in] the Southern District of New York,” Ray said, adding:

Whatever his will and desire to cooperate, prosecutors did not offer him a deal with a cooperation agreement. For the Southern District of New York, it’s unusual not to include a cooperation agreement with a guilty plea. It doesn’t mean Michael Cohen doesn’t desire to cooperate. It takes two to tango. The U.S. attorney’s office would need to be convinced he has something to offer them.