Indictments of 12 Russians Hit Ahead of Trump-Putin Meeting 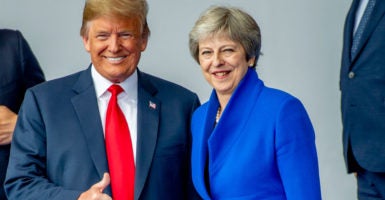 President Donald Trump and British Prime Minister Theresa May stand shoulder to shoulder as heads of state gather Wednesday for a picture during the NATO summit in Brussels, Belgium. (Photo: Robin Utrecht/Sipa USA/Newscom)

Hours later in Washington, the Justice Department announced the indictment of 12 Russians on charges of attempting to interfere with the 2016 U.S. presidential election. But Deputy Attorney General Rod Rosenstein stressed there was no evidence of American involvement or that votes were changed.

Trump said he wanted to talk to Putin on Monday in Helsinki about nuclear proliferation, the Syrian civil war, and the Russian conflict with Ukraine. He said election interference also would be on the agenda.

Rosenstein said he briefed Trump on the indictments. He also stressed that there was no evidence Americans were involved and no evidence that meddling affected the outcome of the election.

Beyond Russia, Trump and May also discussed Britain’s departure from the European Union, which May said would be effective in March 2019.

“We agreed today, that as the U.K. leaves the European Union, we will pursue an ambitious U.S.-U.K. free trade agreement,” May said.

Further explaining the Brexit policy, May said, “We will ensure free movement [of migrants into Britain] comes to an end, as does the jurisdiction of the [European Court of Justice] and sending vast sums of money to the EU. We will ensure we can have an independent trade policy and do deals around the world.”

During the joint press conference in Britain, Trump made a reference to FBI agent Peter Strzok, when he said, “After watching the people, the man that was testifying yesterday, I call it the ‘rigged witch hunt.’”

Trump said he didn’t have high expectations for the Putin meeting. He also said the domestic situation makes a relationship with Russia more difficult to have.

“We have stupidity going on in the U.S. that makes it hard to do something with Russia. People say, ‘He loves Russia.’ I love the U.S.,” Trump said.

Trump said it was his predecessor, President Barack Obama, who permitted Russia to annex Crimea from Ukraine.

“This was an Obama disaster. If I were president, he would not have taken over,” Trump said.

For her part, May praised Trump’s tough stance on Russia. The British leader said:

I thanked President Trump for his support in responding to the appalling use of a nerve agent in Salisbury, after which he expelled 60 Russian intelligence officers.

I welcomed his meeting with President Putin in Helsinki on Monday. We agreed that it is important to engage Russia from a position of strength and unity—and that we should continue to deter and counter all efforts to undermine our democracies.

Trump backed up the point about expelling 60 Russians, saying he has been “extremely tough on Russia.”

“We expelled 60 people. Germany did three,” he said. “The fake news doesn’t want to talk about it. We have been very strong on Russia. If I had a relationship with Russia or with China, it would be good. If we get along with countries, that’s a good thing.”

With regard to Friday’s indictments, the 12 defendants are members of the GRU, an intelligence agency within the Russian military, according to the Justice Department.

The GRU officers are said to have hacked the computer networks of the Democratic Congressional Campaign Committee, the Democratic National Committee, and the Hillary Clinton presidential campaign, and released that information on the internet under the names “DCLeaks” and “Guccifer 2.0.”

The first count alleges a criminal conspiracy against the United States through cyber operations. Counts two through nine charge aggravated identity theft of eight individuals. Count 10 charges a conspiracy to launder money—in this case, allegedly $95,000 to buy servers and for hacking activities. Count 11 alleges conspiracy to hack into computers run by state boards of elections and by secretaries of states.