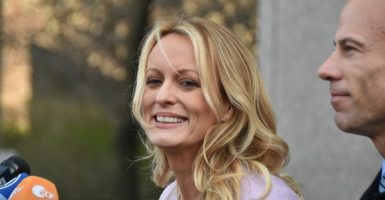 Update: Appearing on The Daily Signal podcast Aug. 23, Hans von Spakovsky noted the relevance of this commentary to former Trump lawyer Michael Cohen’s guilty plea. “Whether or not it’s a violation of campaign finance law all depends on whether this can be considered a campaign-related expense,” von Spakovsky said. He added:

I think the government here is extraordinarily lucky that Cohen agreed to plead guilty, because if they actually had to go to court and prosecute him and prove that in a case, I think they’d lose. Why do I think that? Because they tried this once before and they lost. That was exactly the theory they proceeded with when they tried to prosecute this during the Obama administration—John Edwards, the former Democratic presidential candidate. Remember, that case was even worse.

Here, it was Trump using his own money to make these payments. In the Edwards case, it was actual campaign contributors who paid a million dollars to the mistress of John Edwards. There, the government lost because while people might not like this, and what happened, it wasn’t a campaign-related expense. I don’t think you could actually convince a jury in this case that it was a campaign-related expense.

Giuliani, the former New York mayor who is now part of the president’s legal team, said that one of Trump’s personal lawyers, Michael Cohen, had been reimbursed for the settlement he entered into with an adult film star on the president’s behalf days before the election.

Those claiming the settlement with Stormy Daniels was a campaign-related expense and a violation of campaign finance law don’t have much of a leg to stand on. This is particularly so given that the Justice Department tried to make a similar legal claim against former Democratic presidential candidate John Edwards without success.

The payment was seemingly a nuisance settlement, the kind that celebrities make all the time when faced with meritless claims that will cost far more to defend than making a quick payoff without all of the bad publicity that usually accompanies such cases.

That is particularly true when celebrities are faced with the threat of a salacious claim, even a false one. If Daniels had an actual case of some type of wrongdoing, she probably could have collected a far larger settlement.

Critics of the president claim this not only was a campaign expense that should have been reported but a potentially illegal loan by Cohen. But the settlement was ultimately paid out of Trump’s personal funds and had nothing to do with the campaign since their alleged one-night stand occurred 10 years before the campaign.

No reasonable member of a jury would consider this to be a campaign-related expense that needed to be reported, or to which any other campaign finance rules in the Federal Election Campaign Act apply.

How do we know? Because the Justice Department tried out a similar theory once before with facts much more favorable. In the Edwards case, campaign donors made payments to Edwards’ mistress, Rielle Hunter, a videographer who was specifically hired to help his presidential campaign.

Unlike the Daniels situation, Hunter was paid up to $1 million while directly working for the campaign and Edwards.

The government’s legal theory in that case was that these were campaign-related payments, even though they did not go through the Edwards campaign’s accounts because they were intended to protect Edwards’ reputation during his presidential run. Sound familiar?

Yet a jury acquitted Edwards on one charge of accepting an illegal campaign donation and failed to reach a verdict—resulting in a mistrial—on the other charges, which included filing false reports with the Federal Election Commission for not listing the payments to his mistress.

In other words, the government was unable to convince the jury that these were campaign-related expenses covered by federal campaign finance law. The Justice Department subsequently dropped its prosecution and never retried Edwards—in part, no doubt, because many campaign finance experts called the case “legally flawed,” according to a Politico report in 2012.

I was of the opinion at the time that the government potentially could make a case if it could show the payments were “campaign-related” based on the fact that Hunter was actually working for the campaign and was being paid by donors. But in what was a case of first impression, that argument was not accepted as reasonable by a jury.

The alleged one-night stand between Daniels and Trump is far more of a stretch.

Daniels had no connection to the presidential campaign of any kind and the encounter—if it occurred—didn’t happen during the campaign itself. In any event, even if the Daniels payment were to be considered a campaign-related expense, unlike Edwards, the nominal $130,000 payment wasn’t made by Trump campaign donors but by Trump’s personal attorney (not the campaign’s attorney) with whom he has a long-standing business relationship.

The payment, Giuliani told Hannity, was reimbursed by Trump himself out of the attorney’s monthly retainer and using Trump’s personal funds. Therefore, even if one might be able to reasonably construe the payment to Daniels as somehow related to the presidential campaign, there still would be no violation since candidates are allowed to spend as much of their own money as they want on their own campaigns.

Based on what we know, the Federal Election Campaign Act wasn’t meant to cover something like this, which is why the Edwards prosecution failed. The Federal Election Commission, where I served as a commissioner and which is responsible for enforcing the law, wouldn’t find a violation based on the facts that are known.

If special counsel Robert Mueller is investigating this based on a supposed campaign finance violation, he is definitely overreaching, just as the Justice Department did in the Edwards case.

Unless, of course, Mueller is actually investigating Daniels for possibly violating the federal extortion statute (18 U.S.C. §875), which makes it a felony for anyone to extort money by sending a communication that threatens to injure the “reputation” of another.

Since Daniels never has claimed that she was forced into a supposed sexual relationship, the only basis for any claim—as the nondisclosure provision of the settlement agreement demonstrates—was her threat to make her claims about a supposed affair public to injure Trump’s reputation.

And somehow, I doubt that Mueller is investigating that.