4 Things to Know About Mueller’s Indictment of 13 Russians 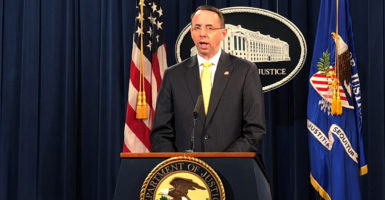 A federal grand jury Friday indicted 13 Russians and three Russian companies on charges of conspiring to interfere with America’s 2016 election.

“It’s time we stop the outlandish partisan attacks, wild and false allegations, and far-fetched theories, which only serve to further the agendas of bad actors, like Russia,” @RealDonaldTrump says.

Information contained in the 37-page indictment, however, indicates that no U.S. citizen knowingly collaborated with the Russian conspirators.

Attorney General Jeff Session recused himself from matters related to the Russia probe because of his role in the Trump campaign. Rosenstein, his deputy, told reporters there is no evidence that what Russians did changed the outcome of the 2016 election.

“The indictment alleges that the Russian conspirators want to promote discord in the United States and undermine public confidence in democracy,” Rosenstein said. “We must not allow them to succeed.”

Here are four key points from the 37-page indictment from a grand jury in the District of Columbia.

1. The Question of  ‘Collusion’

President Donald Trump was quick to tweet after Rosenstein’s press conference that nothing ties his campaign to Russians:

Russia started their anti-US campaign in 2014, long before I announced that I would run for President. The results of the election were not impacted. The Trump campaign did nothing wrong – no collusion!

White House press secretary Sarah Huckabee Sanders later released a statement that said Trump “has been fully briefed on this matter and is glad to see the special counsel’s investigation further indicates—that there was NO COLLUSION between the Trump campaign and Russia and that the outcome of the election was not changed or affected.”

The release by Sanders also included another statement from the president.

“It is more important than ever before to come together as Americans,” Trump said, adding:

We cannot allow those seeking to sow confusion, discord, and rancor to be successful. It’s time we stop the outlandish partisan attacks, wild and false allegations, and far-fetched theories, which only serve to further the agendas of bad actors, like Russia, and do nothing to protect the principles of our institutions. We must unite as Americans to protect the integrity of our democracy and our elections.

Rosenstein said a Russian front company called the Internet Research Agency established a “translator project” in 2014 to focus on the U.S. population.

In July 2016, more than 80 employees were assigned to the translator project. Two of the defendants allegedly traveled to the United States in 2014 to collect intelligence for their American political influence operations.

At least not yet. Rosenstein added: “The special counsel’s investigation is ongoing.”

One surprise to come out of the indictment is that the Russians sought to attack some candidates while pushing support for others, beyond Trump and Hillary Clinton, his Democratic opponent in the general election.

The indictment says Russians sought to disparage not only Clinton but two Republican presidential contenders, Sens. Ted Cruz of Texas and Marco Rubio of Florida.

They also allegedly sought to rally support for the candidacies of Trump and Clinton’s main rival for Democrats’ nomination, Sen. Bernie Sanders, I-Vt.

After the Nov. 8 election, the Russians staged protests both for and against President-elect Trump. Rosenstein said the defendants “organized one rally to support the president-elect and another rally to oppose him—both in New York, on the same day.”

3. Workings of an ‘Information Warfare’ Conspiracy

According to the indictment, the Russians and front companies conducted what they called “information warfare against the United States,” with the stated goal of “spread[ing] distrust towards the candidates and the political system in general.”

All but one of the 13 individual defendants worked for the Internet Research Agency LLC, a company based in St. Petersburg, Russia. The indictment said the 13th individual, Yevgeniy Viktorovich Prigozhin, funded the conspiracy through companies known as Concord Management and Consulting LLC, Concord Catering, and many subsidiaries and affiliates.

The alleged conspirators bought space on computer servers located in the United States, according to the indictment. They opened up hundreds of social media networks on Facebook, Instagram, and Twitter, and made it appear the accounts were controlled by someone in the United States.

Last September, after news reports that Mueller was investigating Russian operatives’ use of social media for election meddling, the indictment says, one defendant wrote: “We had a slight crisis here at work: the FBI busted our activity. … So, I got preoccupied with covering tracks together with my colleagues.”

It’s not likely the Russian government will extradite any of the accused to stand trial in the United States, but the press release by the Justice Department summarizes the formal charges as:

Count One alleges a criminal conspiracy to defraud the United States, by all of the defendants. The defendants allegedly conspired to defraud the United States by impairing the lawful functions of the Federal Election Commission, the U.S. Department of Justice, and the U.S. Department of State in administering federal requirements for disclosure of foreign involvement in certain domestic activities.