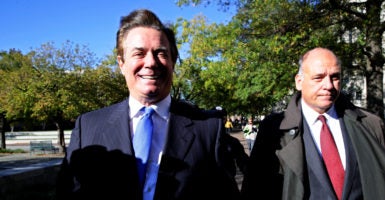 Even though Paul Manafort was indicted Monday on charges that weren’t connected to Donald Trump’s presidential campaign, some legal experts think prosecutors are pursuing leverage for more information. Further, the guilty plea by a low-level campaign adviser could be a more direct link.

“If I were [Manafort’s] lawyer, I would advise him to plead guilty and cooperate,” @nickakerman says

Manafort, former manager of Trump’s presidential campaign, and Manafort associate Rick Gates turned themselves into federal authorities on Monday, but pleaded not guilty to 12 counts that included money laundering and false statements.

Former Watergate prosecutor Nick Akerman said this matter could begin to show similarities to the 1970s-era investigation by gradually getting pleas from, and “flipping,” smaller players. That’s what happened in the Watergate scandal after Judge John Sirica began imposing 25-year sentences, which led to more people talking.

“They’ve got him coming and going. If I were his lawyer, I would advise him to plead guilty and cooperate,” Akerman, who served on the teams of special prosecutors Archibald Cox and Leon Jaworski, told The Daily Signal. “Papadopoulos could be an even bigger key. If he has been cooperating with prosecutors, there could be recordings of these other guys.”

These are the first charges brought since Robert Mueller was appointed special counsel in May.

It’s difficult to determine where else the charges may lead at this point, said Robert Ray, the independent counsel who completed the investigation of President Bill Clinton in the Monica Lewinsky case, which began as a probe into the Arkansas Whitewater real estate development.

The 12-count indictment doesn’t reference the Trump campaign, but rather accuses Manafort and Gates of actions taken well before their time on the Trump campaign, and also for other actions during their time on the campaign as unregistered foreign agents for pro-Russian interests in Ukraine, and $75 million routed through offshore accounts, making false statements and failing to report foreign banking accounts. The indictment says:

Between in or [sic] around 2008 and 2017, both dates being approximate and inclusive, in the District of Columbia and elsewhere, Manafort and Gates devised and intended to devise, and executed and attempted to execute, a scheme and artifice to defraud, and to obtain money and property by means of false and fraudulent pretenses, representations, and promises from the United States, banks, and other financial institutions.

As part of the scheme, Manafort and Gates repeatedly provided false information to financial bookkeepers, tax accountants and legal counsel, among others.

Papadopoulos pleaded guilty to lying to investigators about Russian contacts and attempting to arrange a meeting between Trump or campaign staff and members of Russian President Vladimir Putin’s office. There’s no evidence the meeting occurred.

Independently of whether the charges lead to something more, they have serious merit, Ray said. Further, even if unrelated to the campaign, the activities are under Mueller’s jurisdiction.

“Manafort was formerly the [manager] of a political campaign,” Ray said. “Because of who Manafort was, this falls under the purview of Mueller’s investigation.”

Sanders downplayed the roles of both Manafort and Papadopoulos in the Trump campaign.

Of Manafort, Sanders said, “The president hired Paul Manafort to handle the delegate process, which he did, and he was dismissed not long after that.”

Manafort joined the presidential campaign in March 2016 to help round up delegates for Trump at the Republican National Convention, when a contested convention seemed possible. Manafort reportedly did the same for President Gerald Ford at the contested 1976 GOP convention. He resigned from the Trump campaign in August 2016 after reports he had been lobbying for pro-Russian interests in Ukraine.

Of Papadopoulos, Sanders said, “This individual was a member of a volunteer advisory council that met one time over the course of a year.”

Sanders referred to reports last week that the Hillary Clinton campaign and the Democratic National Committee funded the so-called “Trump Dossier” assembled by the opposition research firm Fusion GPS, with some sourcing from Russians.

“The real collusion scandal, as we’ve said several times before, has everything to do with the Clinton campaign, Fusion GPS, and Russia,” Sanders said. “There is clear evidence of the Clinton campaign colluding with Russia to spread disinformation and smear the president, to influence the election.”

Ray was uncertain whether Mueller’s probe could expand to the Clinton campaign’s payment for the Trump dossier.

“It raises new questions. It’s difficult to say if this is part of his jurisdictional mandate,” Ray said. “Congress is looking at that. So I expect that will proceed on two tracks with law enforcement.”

On Monday, Tony Podesta, the brother of Clinton campaign chairman John Podesta, stepped down as head of the Podesta Group. Fox News host Tucker Carlson reported last week that the Mueller probe of Manafort was linked to the Podesta Group.

Papadopoulos could potentially be a bigger problem, said John Malcolm, head of the Institute for Constitutional Government at The Heritage Foundation.

“This is the beginning of a process, but so far there is no allegation of any wrongdoing by Donald Trump,” Malcolm noted. “These are serious charges. This matter will be troublesome for the president. But at this point, Paul Manafort, who is presumed innocent, allegedly engaged in an extensive effort to keep this information secret from the government. There is no reason to believe he didn’t also keep it secret from the Trump campaign.”

Ultimately, Mueller’s mandate is to investigate possible Russian interference in the 2016 presidential campaign, and of possible collusion between the Trump campaign and Russia. If such collusion occurred, Manafort would almost certainly know, said Michael Clark, a former FBI special agent who has investigated public corruption and financial crimes.

“This is money laundering prior to his time in the campaign. The tactical idea would be to pressure these guys to come out with information on collusion and use the charges as leverage,” Clark, now a criminal justice senior lecturer at the University of New Haven in Connecticut, told The Daily Signal. “Manafort is a significant player. He would be one to have knowledge of actual collusion.”