It’s Time for a Trade Deal With Taiwan 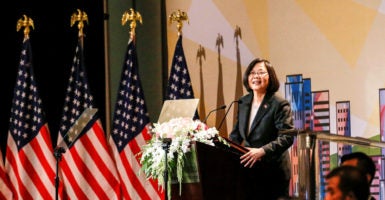 Taiwan and the United States have always been natural partners. Both are committed to free markets, the rule of law, and democracy.

Yet due to China’s constant and growing impositions, the U.S.-Taiwan relationship has not reached its full potential. The two nations have enjoyed a long history of economic cooperation, but there is much more room for dynamic partnership.

Last week in Houston, Taiwan’s President Tsai Ing Wen delivered remarks at a Taiwan-U.S. business forum in which she emphasized the importance of Taiwan and the United States working together to defend the free-market economy.

Such a partnership takes on added urgency and meaning in light of China’s aggressive campaign to deny any acknowledgment of Taiwan’s de facto independence by corporations and countries.

Over the past months, for example, China has threatened to end business dealings with any airlines that refuse to list Taiwan as “Taiwan, CN”—CN standing for China. Other companies such as The Gap and Marriott also have experienced China’s economic bullying.

The latest case came from El Salvador, which just became the third country this year to sever diplomatic ties with Taiwan. China’s aggressive international campaign against an independent Taiwan should not be given another pass.

The United States and Taiwan have a strong history of cooperation and trust, guided by the 1979 Taiwan Relations Act. Today, the two nations have more in common than ever before—both share values related to open markets, free trade, respect for the rule of law, and democratic principles.

In his June speech at the dedication ceremony of the new American Institute in Taiwan office complex, board Chairman James Moriarty summed up succinctly, “As Taiwan has transformed itself into a vibrant democracy and a model for the Indo-Pacific region and beyond, our relationship has grown into a close partnership based on the unshakable foundation of shared values and interests.”

As a country with an impressive record of being a constructive member of the world community, Taiwan has indeed become a positive example of development and prosperity based on high degrees of both political and economic freedom.

In its latest edition of Freedom in the World, an annual report that assesses political rights and civil liberties around the globe, Freedom House classifies Taiwan as a “free” nation. According to The Heritage Foundation’s Index of Economic Freedom, Taiwan is the 13th-freest economy in the world and the fifth-freest in Asia.

With Taiwan’s development into one of Asia’s most vibrant market-oriented democracies, its economic relationship with the United States has steadily grown stronger, becoming one of the most important pillars supporting the critical relationship between the two countries.

Taiwan has proven to be a reliable and strong partner for America in advancing freedom, opportunity, and prosperity in the region and around the globe. More can be accomplished, however, and the United States and Taiwan still have a lot to offer to each other.

Now is the time to capitalize on that mutually beneficial opportunity and begin work on a bilateral free trade agreement.