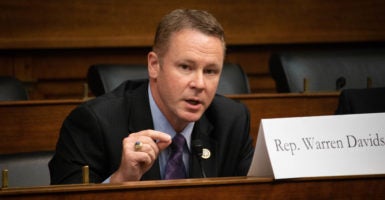 “I think it was good for the president to be engaged in diplomacy,” Rep. Warren Davidson, R-Ohio, says. “Putin’s been in power for a long time in Russia, and frankly, he’s been an adversary of the United States during that entire time.” (Photo: Benjamin Marsh/The Daily Signal)

Conservative lawmakers say President Donald Trump’s strong actions, rather than his ill-chosen words, should speak to his foreign policy strategy for Russia.

“All of the comments this president has made, the press harps on that one comment, and like my other colleagues have said, it’s what he’s done,” Rep. Ralph Norman, R-S.C., said Tuesday of Trump’s press conference the day before with Russian President Vladimir Putin in Helsinki.

Norman and other House Republicans spoke during Conversations With Conservatives, a monthly meeting with reporters hosted by conservative lawmakers and The Heritage Foundation.

“But I’m glad we had the [Trump-Putin] summit … I wish they would focus on the positive aspects of his actions,” Norman said of the president’s critics.

In the press conference with Putin, a reporter asked Trump whether he believes U.S. intelligence officials or the Russian president on whether Russia interfered with the 2016 election.

In his answer, Trump said National Intelligence Director Dan Coats and other U.S. intelligence officials informed him that Russia meddled in the election, but the president also appeared to give credence to Putin’s denial.

Trump’s comments elicited ire from lawmakers and many others, including John Brennan, CIA director under President Barack Obama, who labeled the president’s “press conference performance” as “treasonous.”

I never thought I would see the day when our American President would stand on the stage with the Russian President and place blame on the United States for Russian aggression. This is shameful.

Today’s press conference in #Helsinki was one of the most disgraceful performances by an American president in memory.

“In order for something to be treasonous, it has to undermine who we are as a nation, and I’ve never seen a press conference have that effect,” Meadows told reporters Tuesday. “Normally, it takes policy and actions that go far beyond press conferences. And in fact, if we could solve the nation’s woes with press conferences, they would have been solved a long time ago.”

In remarks to reporters later Tuesday at the White House, the Associated Press reported, Trump said he accepts the findings of his intelligence officials on Russia’s actions during the election.

Trump also said that he meant to say Monday that he didn’t see why Russia “wouldn’t” be responsible for such behavior, not “would” be.

Trump says he accepts the American intelligence community's conclusion that Russia interfered in the election, and misspoke when he said the opposite in Helsinki. Follow the latest updates on US policy on Russia here: https://t.co/2LX4AwkljW

Lawmakers at the earlier event said Trump’s record on policy matters at home and abroad should speak for itself.

“Taxes are down, the economy is up, unemployment is at its lowest point in 20 years, [Neil] Gorsuch is on the court, they like the [Brett] Kavanaugh pick,” Rep. Jim Jordan, R-Ohio, said, adding:

Foreign policy-wise, the trip to China last fall was good, the Korean summit was positive, the hostages have come home, there’s sanctions on Russia, the embassy is in Jerusalem, and we’re out of the Iran deal. So overall, people are pretty darn pleased. You can make whatever you want about the press conference, but that’s the sentiment I get from … the 4th [Congressional] District of Ohio, that’s what I hear from them.

Rep. Warren Davidson, R-Ohio, said the fact that the Trump-Putin summit even happened is a win for the administration.

“I think it was good for the president to be engaged in diplomacy,” Davidson said. “This is consistent with efforts under George W. Bush and Barack Obama. Putin’s been in power for a long time in Russia, and frankly, he’s been an adversary of the United States during that entire time.”

The test for Putin and Russia, Davidson said, is if that regime will cooperate with Trump’s diplomatic efforts: