Trump’s Russian Reset: He Says He Misspoke on Election Interference 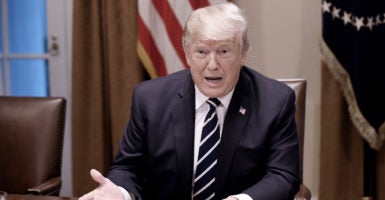 President Donald Trump, speaking during a meeting Tuesday with House Republicans at the White House, says he got something wrong at his press conference with Russian President Vladimir Putin. (Photo: Abaca Press/Douliery Olivier/Abaca/Sipa USA/Newscom)

President Donald Trump said Tuesday that “it should have been obvious” what he meant during a press conference in Helsinki, asserting he believes the conclusion of U.S. intelligence officials that Russia interfered in the 2016 election. But the president again stressed that his campaign didn’t collude with Russians.

During his joint press conference Monday with Russian President Vladimir Putin, Trump left doubt as to whether he believed U.S. intelligence services’ conclusions or Putin’s denial of interference.

During that press conference, the president said of Putin at one point: “He just said it’s not Russia. I will say this: I don’t see any reason why it would be.”

On Tuesday, Trump told reporters at the White House: “The sentence should have been, ‘I don’t see any reason why it wouldn’t be Russia.’ It’s sort of a double negative.”

Trump made the comments in the Cabinet Room before a meeting with House Republicans about additional tax reform, saying he wanted to explain what he had meant in Helsinki.

“I have a full faith and support for America’s great intelligence agencies, always have,” Trump said, surrounded by lawmakers. “And I have felt very strongly, while Russian’s impact had no impact on the outcome on the election, let me be very—and I’ve said this many times—I accept our intelligence community’s conclusions that Russia’s meddling in the 2016 election took place. Could be other people also. A lot of people out there.”

Trump referenced a House intelligence committee report that concluded there had been no cooperation or collusion between the Trump campaign and the Russians.

“There was no collusion at all. People have seen that. The House has already come out strongly on that,” Trump said.

Trump said he thought he was clear during the press conference in Finland, but realized after reading a transcript and viewing a clip of his comment that he needed to clarify.

“I came back and I said, ‘What is going on, what’s the big deal?’” Trump said. “So I got a transcript. I reviewed it. I reviewed a clip of the answer I gave, and I realized there is a need for some clarification. It should have been obvious. I thought it would be obvious.”

Trump repeatedly has called special counsel Robert Mueller’s investigation of Russia’s election meddling, and the role of the Trump campaign, a witch hunt. On Friday, the Justice Department announced the indictment of 12 Russian intelligence officials in connection with alleged hacking of Democrats’ computers.

Trump said his administration is “doing everything in our power to prevent Russian interference in 2018.”

He also called out the Obama administration for doing too little.

“President Obama was given information just prior to the election, last election 2016, and they decided to not do anything about it,” Trump said. “The reason they decided not to do that was pretty obvious, because they thought Hillary Clinton was going to win the election.”