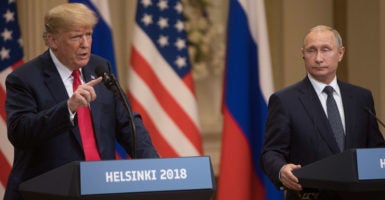 In a joint press conference with President Donald Trump in Helsinki, Finland, Putin said he wants Russian law enforcement to have access to U.S. businessmen he said evaded paying Russian taxes on $1.5 billion worth of business in his country.

Putin said the 1999 Treaty Between the United States and Russia on Mutual Legal Assistance in Criminal Matters, negotiated during the Clinton administration, allows each country to seek prosecution and extradition from the other.

“This treaty has specific legal procedures,” Putin told reporters following his meeting with Trump in Helsinki. “We can offer that … special attorney Mueller, he can use this treaty as a solid foundation to send an official request to us so that we can interrogate this individual who he believes is privy to some crimes.”

Putin, who earlier said Russia “never interfered and is not going to interfere” with American elections, continued:

Our law enforcement is perfectly able to do this questioning and send the appropriate materials back to the United States. Moreover, we can meet you halfway. We can make another step. We can actually permit official representatives of the United States, including the members of this very commission headed by Mr. Mueller, we can let them into the country and they will be present for this questioning.

During the press conference, a reporter asked Trump who he believed, U.S. intelligence or Putin regarding election interference by Russia.

Trump said Director of National Intelligence Dan Coats and other intelligence officials informed him that Russia had interfered in the 2016 presidential election, but seemed impressed by Putin’s denial.

The president added: “He just said it’s not Russia. I will say this: I don’t see any reason why it would be.”

The Justice Department, in announcing the indictments, stressed that no votes were changed, the election outcome was not affected, and there was no evidence Americans were involved in the Russian interference with the 2016 presidential election.

Trump said of Putin’s suggestion and of Mueller’s probe of Russian interference in the election: “He offered to have the people working on the case come and work with their investigators with respect to the 12 people. I think that’s an incredible offer.”

Putin went on to say he wanted Russian law enforcement to be able to use the same 1999 treaty to prosecute Bill Browder, CEO of Hermitage Capital Management, and associates with the investment fund specializing in Russian markets.

Putin claims Browder’s company made $1.5 billion in profits in Russia, but dodged taxes. Browder has described police state tactics by the Russian government.

It wasn’t clear from Putin’s comments that he was aware Browder himself gave up U.S. citizenship to live in Britain so he could avoid U.S. taxes.

Putin claimed some of the ill-gotten gains from Russia went to one of Hillary Clinton’s presidential campaigns.

“We expect that the Americans would reciprocate and that they would question officials, including officers of law enforcement and intelligence services in the United States, who we believe have something to do with illegal actions on the territory of Russia, and request the presence of our law enforcement,” Putin said. “For example, we can bring up Mr. Browder in this case. Business associates of Mr. Browder have earned more than $1.5 billion in Russia. They never paid any taxes, neither in Russia nor in the United States.”

Browder wrote a 2015 book about his experience in Russia, “Red Notice: A True Story of High Finance, Murder, and One Man’s Fight for Justice.”

Trump blamed the Mueller investigation for harming relations between the United States and Russia. Asked during the press conference if he blamed Russia at all, Trump replied:

The [Russia] probe is a disaster for our country. I think it’s kept us apart. It’s kept us separated. There was no collusion at all. Everybody knows it.

The president expressed frustration about how Democrats are using evidence of Russian meddling as an excuse for Clinton’s loss to him.

“That was a clean campaign. I beat Hillary Clinton easily. And, frankly, we beat her—and I’m not even saying from the standpoint—we won that race. And it’s a shame that there could even be a little bit of a cloud over it. People know that, people understand it. But the main thing—and we discussed this also—zero collusion.”

Trump said things were better after the Monday meeting.

“Our relationship has never been worse than it is now,” the president said. “However, that changed as of about four hours ago. I really believe that.”