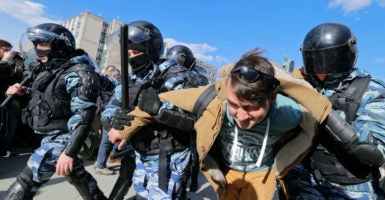 Russian anti-corruption protestors and activists are feeling the brunt of the Kremlin’s wrath.

Unlike in the United States, where the right to protest is constitutionally enshrined and whistleblowers are legislatively protected, in Russia, those who have the courage to stand up to corrupt leaders place their freedom as well as their lives on the line.

Let us never forget that critical distinction, nor let us fail to express our outrage and sympathy with the brave Russians who are risking everything.

Since Sunday, huge anti-corruption protests have broken out in cities across the country against Russia’s powerful and wealthy politicians—most notably, President Vladimir Putin and Prime Minister Dmitry Medvedev, whose luxury lifestyles contrast sharply with the increasingly impoverished lives of Russian citizens who are being squeezed by declining economic conditions.

The protests started in Moscow and were initially ignored by the Putin government. But soon, the movement spread, and Russians began gathering by the hundreds of thousands in streets and town squares across the country.

That’s when the authorities decided to take action. As of now, hundreds upon hundreds of demonstrators have been jailed.

This is not the first time in recent years that Russian authorities have crushed protest movements. Between 2011 and 2013, Russian demonstrators took to the streets to protest the country’s corrupt election process, which yet again brought Putin back to power.

Opposition leader Alexei Navalny, who has threatened to run against Putin in the next election and is a key figure in organizing the protests, was arrested two weeks ago—a move that seems only to have emboldened his supporters.

On March 21, Nikolai Gorokhov, a lawyer for the Magnitsky family, “fell” from the fourth floor of his apartment building in what appeared to all the world like a defenestration.

Police have denied any foul play and put out the dubious story that Gorokhov was installing a bath tub and tragically stumbled out the window.

Incidentally, Gorokhov was due to appear in a Moscow court the very next day in a suit filed by Magnitsky’s mother against yet more Russian officials.

Sergei Magnitsky, of course, was the millionaire businessman who ran afoul of the Putin regime by testifying to its embezzlement of $230 million from a U.S. investment firm. He died in prison in 2009 from a lack of medical care for a life-threatening respiratory condition.

The U.S. Congress subsequently passed the Magnitsky Act in 2012, which sanctions officials suspected of having a hand in his death and others engaging in corruption. Any potential consideration of repealing or renaming the Magnitsky Act should clearly be shelved under this harsh Soviet-style crackdown.

The Trump administration has denounced the brutal treatment of the demonstrators, as well it should. A statement issued by the State Department said, “The United States strongly condemns the detention of hundreds of peaceful protestors throughout Russia on Sunday,” and “calls on the government of Russia to immediately release” them.

We should expect nothing less from the U.S. government and must keep up the pressure.