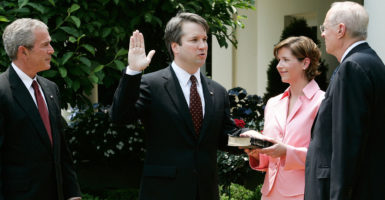 Brett Kavanaugh is sworn in as a D.C. Circuit judge by Supreme Court Justice Anthony Kennedy on June 1, 2006, as his wife Ashley and President George W. Bush look on in the Rose Garden of the White House. He now faces another bruising confirmation battle to replace Kennedy. (Photo: Alex Wong/UPI/Newscom)

That’s what happened when President George W. Bush named Kavanaugh to the U.S. Court of Appeals for the District of Columbia Circuit in 2003. He was not confirmed by the Senate until 2006.

“I was surprised at the time that Kavanaugh did get confirmed to the D.C. Circuit, given the number of Bush nominees that Senate Democrats were obstructing,” Levey told The Daily Signal.

Democrats opposed that nomination largely because Kavanaugh worked for the counsel’s office in the Bush White House and previously was a lawyer on independent counsel Kenneth Starr’s team that investigated President Bill Clinton in the 1990s.

Democrats also criticized Kavanaugh for being part of the Bush campaign’s legal team during the 2000 Florida recounts in 2000. He also had argued against deporting a Cuban boy, Elián González, whose mother died getting him to America but whose father sought his return to Fidel Castro’s Cuba.

After a long, contentious process, the Senate confirmed Kavanaugh to the D.C. Circuit—viewed as a springboard to the Supreme Court—by a vote of 57-36 on May 26, 2006.

Four Senate Democrats—Tom Carper of Delaware, Robert Byrd of West Virginia, Mary Landrieu of Louisiana, and Ben Nelson of Nebraska—voted for Kavanaugh at the time. Only Carper still serves in the Senate.

Every Senate Republican—including Lisa Murkowski of Alaska and Susan Collins of Maine—voted to confirm him to the D.C. appeals court judgeship.

Sen. Charles Schumer, D-N.Y., the current Democratic leader, voted against the Kavanaugh nomination and was a leading critic during that confirmation process.

During a White House ceremony on June 1, 2006, Supreme Court Justice Anthony Kennedy swore in Kavanaugh, his former law clerk. Neither could know that Trump would pick Kavanaugh to replace Kennedy some 12 years later.

At the time Bush nominated Kavanaugh, the Senate’s Democratic minority was filibustering Bush judicial nominees on a large scale.

This was before the “Gang of 14” agreement in 2005 among a bipartisan group of senators allowed more up-or-down votes, but maintained the filibuster rule. However, judicial filibusters eventually were scrapped.

The agreement allowed a Senate vote on Bush’s judicial nominees except in “extraordinary circumstances.” This directly affected 10 Bush nominees.

Kavanaugh wasn’t among the 10, but the governing principle eventually allowed his nomination to come to a vote, Levey said.

“Democrats were critical of Kavanaugh, but they were trying to block a number of judges as a larger pattern of obstruction,” Levey said. “Don’t draw too many conclusions from circuit court votes. The stakes are higher and it is more divisive today. We also no longer have the judicial filibuster.”

Kavanaugh was among many Bush judicial nominees slow-walked by Democrats, Elizabeth Slattery, a legal fellow at The Heritage Foundation, told The Daily Signal.

“For Democrats, he was controversial because he worked for Ken Starr and was a close adviser to President Bush,” Slattery said. “But he did get some Democratic votes.”

The first confirmation hearing for Kavanaugh occurred in April 2004, when Judiciary Committee member Durbin, now the Senate’s No. 2 Democrat, had a notable line.

“As I look through all of the different issues that you have been involved in as an attorney in public service and the private sector, it seems that you are the Zelig or Forrest Gump of Republican politics,” Durbin said. “You show up at every scene of the crime. You are somehow or another deeply involved, whether it is Elián González or the Starr Report, you are there, and it strikes me as worrisome.”

Kavanaugh was a principal author of the 1998 Starr Report to Congress that made the case that Clinton committed perjury and obstructed justice in covering up his affair with an intern, Monica Lewinsky. The House impeached Clinton, but the Senate acquitted him in a trial.

My background has not been in party politics. I have been a lawyer for clients, working for judges, Justice Kennedy, working in the Justice Department, working in the Independent Counsel’s Office. … And then in the White House Counsel’s Office and as staff secretary. As in any White House, there is the mix of law and policy that goes with it, to be sure, but my background has been one where I have been involved in legal issues.

Democrats stalled the nomination, but Kavanaugh came before the committee again on May 9, 2006.

Days before the second confirmation hearing in 2006, The New York Times editorial board blasted Kavanaugh for “a résumé that screams political partisanship” and asserted that as associate White House counsel for Bush, “he helped select many of the administration’s far-right judicial nominees.”

“There are good reasons the nomination has been kept on hold. Mr. Kavanaugh was unqualified then, and he is unqualified now,” the Times editorial said. “Moreover, since his Senate hearing in 2004, new issues have been raised that he should be questioned about, including what role, if any, he played in Bush administration policies like the National Security Agency’s domestic spying program.”

A Lecture From Schumer

During the 2006 confirmation hearing, Schumer lectured Kavanaugh for his partisanship:

For much of your career, your considerable talents have been enlisted in partisan and polarizing issues. In short, you have been the go-to guy among young Republican lawyers appearing at the epicenter of so many high-profile, controversial issues in your short career, and it is only natural that such a record would give many senators pause, particularly those of us on this side of the aisle.

From the notorious Starr Report, to the Florida recount, to the president’s secrecy and privilege claims, to post-9/11 legislative battles including the Victims Compensation Fund, to ideological judicial nomination fights, if there has been a partisan political fight that needed a very bright legal foot soldier in the last decade, Brett Kavanaugh was probably there.

But then-Sen. Arlen Specter, R-Pa., chairman of the Judiciary Committee at the time, defended Kavanaugh. Specter asserted that the nominee wasn’t an ideologue and did his job for both the independent counsel and the White House.

Kavanaugh told the committee at the 2006 hearing: “If confirmed, I will call them as a I see them. My record shows I was fair.”

The confirmation was contentious because the senators knew the stakes involved with the D.C. Circuit, noted Anthony M. Sabino, professor of law at St. John’s University.

“That [2006] proceeding is very informative to the current confirmation process for two reasons. One, it’s the most recent hearing, and the composition of the Senate hasn’t changed that much,” Sabino told The Daily Signal.

The second, he said, is because the D.C. Circuit is a “AAA baseball team for the Supreme Court’s major league.”

“This court has elevated importance because it is the pipeline for cases on regulation and government power,” Sabino said. “But if the Kavanaugh hearing for the circuit court was a 5, the Supreme Court hearing will be a 12.”

One advocate of Kavanaugh’s confirmation to the high court, Richard Land, president of the Southern Evangelical Seminary, recalls the tough 2006 process.

“It was a bruising confirmation then, mainly because of Democratic animus toward George W. Bush,” Land told The Daily Signal. “They will throw everything that sticks at him this time. They will attack him for being a Catholic, for being a white male, for working for George W. Bush and for Ken Starr.”

The American Bar Association provided some fodder for Democrats a day ahead of the 2006 hearing by downgrading Kavanaugh from “well qualified” to “qualified.”

“Just yesterday they were given further voice in the form of the American Bar Association’s follow-up report, which was made public yesterday, which explained why six members of the ABA committee felt compelled to downgrade their rating,” Schumer said.

During the 2006 hearing, Sen. Dianne Feinstein, D-Calif., now the ranking member on the Judiciary Committee, criticized Kavanaugh, then 41, for lack of experience.

“First of all, you’re very young, which is, I think, a blessing for you, but in terms of an appellate judge, I think it is a detriment,” Feinstein told him, adding: “Without a record either as a trial lawyer or as a judge, it’s very difficult for some of us to know what kind of a judge you would be and whether you can move away from the partisanship and into that arena of objectivity and fairness.”

Land predicted that confirmation to the Supreme Court will be much tougher for Kavanaugh.