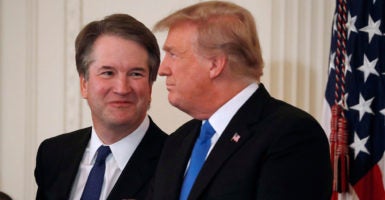 President Donald Trump nominated Judge Brett Kavanaugh to the Supreme Court in a prime-time announcement Monday night. If confirmed by the Senate, Kavanaugh would replace retiring Justice Anthony Kennedy to give the court a likely solid 5-4 conservative majority.

“Throughout legal circles, he is considered a judge’s judge, a true thought leader among his peers,” Trump said in announcing his choice at the East Room of the White House.

President George W. Bush nominated Kavanaugh to the D.C. Circuit Court of Appeals in 2003, but he wasn’t confirmed until 2006, by a Senate vote of 57-36. The D.C. Circuit is considered a stepping stone to the high court.

Here are eight things to know about the likely next Supreme Court justice.

1. Clerk for the Man He Could Replace

Kavanagh, a graduate of Yale University Law School, once clerked for the man he hopes to replace on the high court, Justice Anthony Kennedy.

In introducing the judge, Trump said: “Just like Justice [Neil] Gorsuch, he excelled as a clerk for Justice Kennedy.”

“Justice Kennedy devoted his career to securing liberty,” Kavanaugh said. “I am deeply honored to be nominated to fill his seat on the Supreme Court.”

Kavanaugh talked about his mother, who was a teacher in two predominantly black D.C. schools before becoming a prosecutor.

“My introduction to law came at our dinner table when she practiced her closing argument,” Kavanaugh said. “Her trademark line was, ‘Use your common sense. What rings true, what rings false?’” he said at the White House.

“That’s good advice for a juror and a son. One of the few women prosecutors at that time, she overcame barriers and became a trial judge. The president introduced me tonight as Judge Kavanaugh. But, to me, that title will always belong to my mom.”

His father also went to law school at night while working full time.

3. A Majority of Female Clerks

Kavanaugh, who praised his wife Ashley and two young daughters, Margaret and Liza, also talked about being proud to have hired more female law clerks than male clerks.

“As a judge, I hire four law clerks each year. I look for the best,” Kavanaugh said.

“My law clerks come from diverse backgrounds and points of view. I am proud that a majority of my law clerks have been women.”

4. They Call Him Coach K

“For the past seven years, I’ve coached my daughters’ basketball teams. The girls on the team call me Coach K,” he told the East Room crowd, to laughter.

“I am proud of our Blessed Sacrament team that just won the city championship,” he said. “My daughters and I also go to a lot of games. A favorite memory was going to the historic Notre Dame-UConn women’s basketball game at this year’s Final Four.”

As the president grinned, Kavanaugh low-fived daughter Liza after saying she “loves sports, and she loves to talk.”

Kavanaugh has investigated one president and provided legal counsel to another. He also has written about investigating presidents, which could be relevant during a special counsel probe of Trump.

Before serving on the D.C. appeals court, Kavanaugh was a senior associate White House counsel and assistant to the president for more than five years during the Bush years.

From 1994 to 1997, and then again in 1998, Kavanaugh worked as associate counsel for Independent Counsel Ken Starr’s investigation of President Bill Clinton’s involvement in the Whitewater land deal, the Monica Lewinsky affair, and other legal matters.

In 1992 and 1993, Kavanaugh was an attorney for the Office of the Solicitor General.

He was a principal author of the Starr Report to Congress that made the case that Clinton committed perjury and obstructed justice regarding the Lewinsky matter. The House impeached Clinton, but the Senate acquitted him in a trial.

A 2012 Minnesota Law Review article written by Kavanaugh could gain scrutiny during his confirmation hearing, at a time when a special counsel investigation probes Russian meddling in the 2016 election and the role of Trump associates.

From the perspective of a lawyer on Starr’s team, and later a White House lawyer, Kavanaugh argued that Congress should pass legislation shielding a sitting president from criminal investigation, indictment, or prosecution while in office. Justice Department opinions assert that a president cannot be indicted, but no law prevents it.

“The indictment and trial of a sitting president …would cripple the federal government, rendering it unable to function with credibility in either the international or domestic arenas,” Kavanaugh wrote. “Such an outcome would ill serve the public interest, especially in times of financial or national security crisis.”

Kavanaugh has written in great detail about the separation of powers and statutory interpretation. He co-authored a book on judicial precedent (with Bryan Garner and 11 appeals court judges, including then-appeals Judge Neil Gorsuch).

He teaches at Harvard, Yale, and Georgetown.

“I teach that the Constitution’s separation of powers protects individual liberty, and I remain grateful to the [Harvard Law School] dean who hired me, Justice Elena Kagan,” Kavanaugh said, in a nod to the woman who now is part of the Supreme Court’s liberal wing.

Kavanaugh delivered the 2017 Joseph Story Distinguished Lecture at The Heritage Foundation. The address is reserved for renowned federal judges, who have included Justice Clarence Thomas. Kavanaugh spoke about the judiciary’s role in maintaining the separation of powers.

“Judge Kavanaugh has a star-studded resume and one of the best minds on the federal bench,” Carrie Severino, chief counsel for Judicial Crisis Network, told The Daily Signal. “He will make a brilliant addition to the Supreme Court.”

Going into the confirmation battle, Kavanaugh has a clear record of decisions on high-profile matters:

—Regarding campaign finance law, he ruled in  Emily’s List v. FEC in 2009 that the Federal Election Commission’s regulation restricting how nonprofits raise and spend money violates the First Amendment. His ruling came before the Citizens United decisions.

—In one of his more controversial opinions, in a 2011 case involving Obamacare  known as Seven-Sky v. Holder, Kavanaugh wrote a dissenting opinion asserting that federal courts shouldn’t hear constitutional challenges to Obamacare.

He argued: “There is a natural and understandable inclination to decide these weighty and historic constitutional questions. But in my respectful judgment, deciding the constitutional issues in this case at this time would contravene an important and long-standing federal statute, the Anti-Injunction Act, which carefully limits the jurisdiction of federal courts over tax-related matters.”

—In 2012, Kavanaugh dissented from the majority in Coalition for Responsible Regulation v. EPA, a case that determined the Environmental Protection Agency could disregard cost-benefit analysis when considering a regulation. The Supreme Court reversed the D.C. Circuit, and cited Kavanaugh’s dissenting opinion.

—In 2013, Kavanaugh ruled in the case of Loving v. IRS that the Internal Revenue Service exceeded its legal authority when it attempted to regulate tax preparers.

—In 2015, in the case of al-Bahlul v. U.S., Kavanaugh joined the majority upholding Yemini citizen Ali Hamza al-Bahlul’s conviction by a military commission on charges of conspiracy to commit war crimes.

—In 2016, Kavanaugh wrote the opinion in PHH Corp. v. Consumer Financial Protection Bureau, finding that the agency’s structure is unconstitutional. The ruling, however, was reversed by the full D.C. Circuit.

—In 2017, he dissented in Garza v. Hargan, in which the majority on the D.C. Circuit determined that an illegal immigrant minor had the right to obtain an abortion while in federal custody.

“With the nomination of Judge Brett Kavanaugh to the Supreme Court, President Trump has chosen a man who will be another great justice,” Meese, the Ronald Reagan distinguished fellow emeritus at The Heritage Foundation, said in his own formal statement, adding:

Judge Kavanaugh follows the same pattern as Justice Neil Gorsuch, a fair and independent jurist who will faithfully apply the law as written and honor the Constitution. The American people deserve a swift confirmation by the U.S. Senate so Judge Kavanaugh can take his seat on the high court when it reconvenes for the fall term in early October.

I applaud President Donald Trump for nominating Judge Brett Kavanaugh to be an associate justice on the Supreme Court of the United States. The president understands that his appointments to the high court may very well be his longest-lasting legacy, and he has selected yet another highly qualified individual who, like Neil Gorsuch, will be impartial, fair, and principled. It’s more important than ever that we have justices who are faithful to the Constitution and interpret the laws and Constitution according to their text and original meaning.

As Ronald Reagan once remarked, ‘[U]nless judges are bound by the text of the Constitution, we will, in fact, no longer have a government of laws, but of men and women who are judges.’ With the nomination of Judge Kavanaugh to the Supreme Court, the American people have an opportunity to learn about the limited, but important, role the judiciary was designed to play in our system of government.