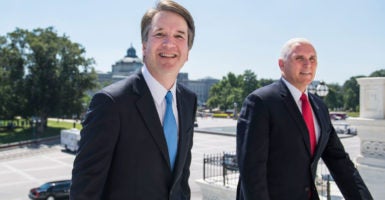 “I am tremendously impressed with the guy,” John Elwood, now a partner at Vinson & Elkins, said. “He writes very thoughtful opinions, which frequently … his dissenting opinions become Supreme Court majority opinions along the way.”

Elwood made his remarks Tuesday at The Heritage Foundation’s “Scholars & Scribes Review the Rulings” event, in which prominent litigators analyzed the Supreme Court’s recently concluded 2017-18 term.

“[Kavanaugh] does book reviews that are thoughtful. I was just reading today a book review he did of David Barron’s book [“Waging War: The Clash Between Presidents and Congress, 1776 to ISIS”] on the president’s foreign affairs power, war-making powers,” Elwood said. “I would like to follow him around for a day just to see if he has the same 24 hours that I do, because he’s so incredibly productive.

“I’ve only had a couple of arguments in front of him … but I told my client, ‘We had a very tough case’ for the first one, and I said, ‘If we don’t get his vote, we didn’t deserve to win.’ Because I think enough of his judgment that I think, I will do the best job I can, but if I don’t get his vote, I probably should have lost.”

John Malcolm, vice president of the Institute for Constitutional Government at The Heritage Foundation, hosted the panel discussion. He was deeply involved in the process of compiling the original list of judicial candidates for Trump’s consideration, together with the Federalist Society’s Leonard Leo.

Along with Elwood, lawyers Willy Jay of the firm Goodwin Procter and Neal Katyal of Hogan Lovells made up the panel, which reviewed several major cases decided in the high court’s just-ended term, including the National Institute of Family and Life Advocates (NIFLA) case and so-called “travel ban” decision. The NIFLA decision overturned a California law that compelled pro-life pregnancy centers to advertise the availability of abortion services.

“It’s very hard for anyone who has worked with him, appeared before him, to frankly say a bad word about him,” Katyal said. “This is an incredibly brilliant, careful person, but someone who will move the court in a conservative direction.

“In my practice, we basically have a rule that if there’s a Kavanaugh clerk who applies, we hire that person. He’s legendary for his preparation,” Katyal added. “This is a guy who reads … every one of those opinions, sits down with his clerks on Fridays, and goes through them, each one, every single opinion. He is an unusual judge, so I think it will be a very interesting set of hearings.”

Jay spoke about Kavanaugh’s work on the administrative state.

“He’s a very careful and meticulous judge, extremely well-prepared. He comes from the [U.S. Court of Appeals for the] D.C. Circuit. He’s obviously deeply immersed in separation of powers [cases] and in the law governing the administrative state,” Jay said.

“One of the ways that he is going to replace Justice Kennedy and potentially change the court—I’m not saying ‘move in one direction’—is what cases they’re going to choose to hear going forward.

Kavanaugh now begins what is already shaping up as a contentious Senate confirmation process.

Even before Trump announced his selection Monday night, protesters outside of the Supreme Court had signs relating to the top contenders ready to go, without knowing who had been selected. Many repeated some of the same tactics used during the confirmation process last year of now Supreme Court Justice Neil Gorsuch—with fill-in-the-blank signs at the ready.

The Women’s March jumped the gun and sent out an embarrassing email that left the nominee’s name blank as “XX,” suggesting the feminist group’s inclination to fight anyone Trump would have nominated. In the second paragraph of the press release, the feminists also spelled the Supreme Court nominee’s name incorrectly as “Cavenaugh.”

Fox News host Shannon Bream, with years of experience as the network’s Supreme Court correspondent, noted the unusual tension outside the Supreme Court building during and after the Kavanaugh announcement.

Very few times I’ve felt threatened while out in the field. The mood here tonight is very volatile. Law enforcement appears to be closing down 1st Street in front of SCOTUS.

Bream and her team made the decision to move their live show from the field back into the studio for safety reasons.