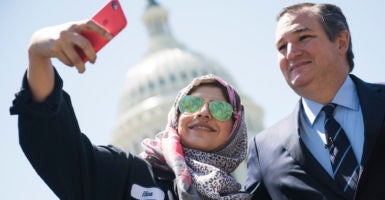 “By investing in the next generation of students and expanding school choice, we’re able to allow more students to have access to an education that truly fits their child’s needs, and to escape the one-size-fits-all approach to education." Pictured is Sen. Ted Cruz taking a selfie with Hina Kanwel of Monroe Energy on the east lawn of the Capitol on April 26, 2018. (Photo: Tom Williams/CQ Roll Call/Newscom)

The Student Empowerment Act further broadens 529 accounts, also known as college savings plans, to include “K-12 elementary and secondary school expenses for public, private, and religious schools, including homeschool students.” These expenses can include things such as tutoring costs, books, fees associated with standardized tests, and educational therapies for students with disabilities.

The bill amends the Student Opportunity Amendment, which was signed into law in December 2017 as part of the Tax Cuts and Jobs Act, and expanded 529 accounts to include tuition for the aforementioned institutions.

A 529 account is a versatile tax-free savings plan sponsored by the federal government, states, state agencies, or other educational institutions designed to incentivize savings for forthcoming education costs.

“By investing in the next generation of students and expanding school choice, we’re able to allow more students to have access to an education that truly fits their child’s needs, and to escape the one-size-fits-all approach to education. #EmpowerOurStudents,” Cruz tweeted on the issue.