Congress Can Cut Billions in Wasteful Spending by Following This Blueprint 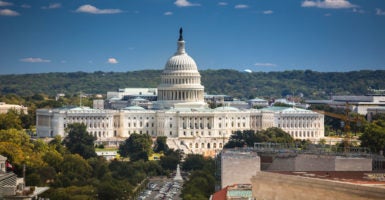 The Senate Budget Committee met May 23 to consider the Government Accountability Office’s annual report on government efficiency and effectiveness, which identifies areas of unnecessary overlap, fragmentation, and duplication among federal programs.

The Government Accountability Office supplements that identification of waste with recommendations of what to do about it, presenting specific proposals upon which Congress and executive agencies should act.

This year, the report identified 68 new and 297 renewed cost-saving recommendations for members of Congress and leaders of federal agencies. Examples include a modification to low-activity radioactive waste treatment by the Department of Energy that would save tens of billions of dollars; site neutrality in payments to hospitals under Medicare that would save $1 billion to $2 billion annually; and prevention of overpayments by the Social Security Administration that would save billions.

The benefits are sitting right in front of policymakers and agency leaders, but Washington fails to act. Since 2011—the inception of the Government Accountability Office’s annual report—48 percent of recommendations remain only partially addressed or entirely unaddressed.

Fully addressing these actions could save additional tens of billions of dollars, on top of $178 billion already saved from implementation of previous recommendations.

Washington’s general mismanagement seems to be the primary reason for delayed action. When asked about the slow execution of reforms at the Department of Veterans Affairs, for example, Comptroller General Gene Dodaro, head of the Government Accountability Office, noted that “[the VA] has some of the most serious management problems in the federal government.”

The inertia of federal departments across the board is especially frustrating when, according to the comptroller general, the report’s recommendations “wouldn’t adversely affect any provision of services.”

Even if federal departments such as the VA took more initiative, much of the idleness can be traced to Congress. Almost 70 percent of the Government Accountability Office’s recommendations to Congress have not been addressed at all or only partially addressed. That number for executive branch recommendations is 45 percent.

The question then is how do we persuade lawmakers and agency officials to act to realize substantial savings and make government work more effectively for the American people?

For starters, Congress and the administration should get serious about following through on commonsense recommendations to improve government operations. Introduced by Sen. Joe Manchin, D-W.Va., the Duplication Elimination Act of 2016, which would require the president to submit a proposed joint resolution to Congress for implementing the Government Accountability Office’s recommendations, offers one promising path.

Outside of the actions specified in the most recent report, there are several other initiatives that Congress should undertake to cut unnecessary spending.

For example, eliminating concurrent receipt of retirement pay and disability compensation for veterans would end “triple-dipping” by veterans from federal programs. Congress should also repeal the duplicative Agriculture Department catfish inspection program, which imposes an unnecessary double burden on seafood processing facilities, who are required to comply with both Food and Drug Administration and Agriculture Department regulations.

These recommendations, among others, are included in The Heritage Foundation’s “Blueprint for Balance,” which—if fully implemented—would balance the federal budget without raising taxes while still funding a strong national defense.

An independent Government Waste Commission, similar to the Defense Department’s Base Realignment and Closure Commission, would also be a good way to cut waste and prevent overlap, duplication, and fragmentation.

The plans, recommendations, instructions, and guidelines are all in place. Congress need only act on them.