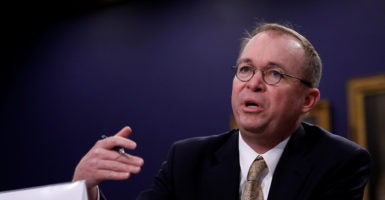 “[We] hope to have something here in the next couple weeks,” Office of Management and Budget Director Mick Mulvaney said Wednesday. (Photo: Aaron P.Bernstein/Reuters/Newscom)

Office of Management and Budget Director Mick Mulvaney says his staff will soon be sending a package to Congress to rescind some of the planned spending in the $1.3 trillion omnibus bill signed last month by President Donald Trump.

“[We] hope to have something here in the next couple weeks,” Mulvaney said Wednesday during a House appropriations subcommittee meeting, reports The Washington Times.

Conservative lawmakers, such as Rep. Dave Brat, R-Va., want Trump to send a rescission request to Congress to cancel nondefense spending that the legislators previously approved in the 2,000-plus-page omnibus bill.

“We need a plan right now, where the White House and then the House leadership both say, ‘Look Mitch, there’s plenty of money just sitting around in pots, where we can buy significant savings for the American people after that omni[bus], and we want to show them we are serious about fiscal responsibility,’ and so that’s what it is going to take,” Brat told The Daily Signal in a phone interview Thursday.

Senate Majority Leader Mitch McConnell, R-Ky., said Tuesday that he does not favor such an effort.

“You can’t make an agreement one month and say, ‘OK, we really didn’t mean it,'” McConnell said on Fox News. “[Trump] agreed to it. He was involved in the negotiation and signed the bill … We had a deal with the Democrats.”

“Once again, Mitch McConnell is making excuses for why Republicans cannot do what we all promised in the past,” Walker said Tuesday in a statement. “His latest rejection of President Trump’s spending cuts shows that McConnell prioritizes his backroom deal with Democrats over Republicans’ promise to rein in government excess.”

To start the rescission process, the president must send a request or requests to Congress. Once he does so, Congress has 45 in-session days to act.

Rescissions are introduced as legislation in both the House and Senate and referred to a committee; they may be thrown out if the committee does not act in 25 days.

Rescissions used to be commonplace, as presidents in between Jimmy Carter and Bill Clinton “sent up tons of the rescission requests,” according to Paul Winfree, director of the Thomas A. Roe Institute for Economic Policy Studies at The Heritage Foundation.

In an op-ed published April 12 by The Washington Times, Brat wrote the first item on the chopping block should be an item from Senate Minority Leader Chuck Schumer, D-N.Y.

“Let’s start with cutting Senate Minority Leader Chuck Schumer’s Gateway Project, a pork project that would build a new tunnel to connect New Jersey and New York,” Brat wrote. “The estimated cost of the project has doubled in the last decade and a single shovel hasn’t even pierced the ground. Why should taxpayers from my state have to pay for this?”

“Rescissions are not about the [omnibus] — it’s about saving money,” McCarthy said. “You could have some unencumbered funds that are still out there from past times … If you look under Clinton, during Clinton’s administration they did it 111 times. Reagan proposed 600 times to do this. It’s a way to save money.”

Trump signed the omnibus bill March 23, after tweeting that he might veto it, and Brat said he is hopeful a rescission package will pass if the White House supports the push.

“I think it’s got a chance if the White House and House leadership together try to team up and tell the Senate, ‘Hey, it’s about time you guys got to look out for the American people here, and it should be made in public if it needs to be,” Brat said.

Jason Pye, vice president of legislative affairs at FreedomWorks, told The Daily Signal in an email that there is no reason why Congress shouldn’t pass a rescissions package.

“Presidents from [Richard] Nixon to Clinton used this valuable tool, with Congress working to meet their requests,” Pye said. “It hasn’t been used for several years, but Congress should use it now to right the wrongs of the budget and the omnibus and work with President Trump to pass rescissions. There is no portion of this spending bill that could not stand to see very significant spending cuts.”