White House Insists Trump Not Telegraphing Next Move in Syria 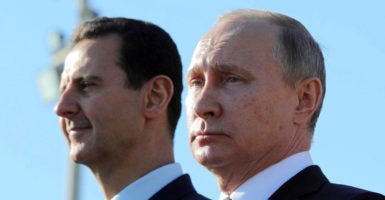 “That’s certainly one option, but that doesn’t mean it’s the only option or the only thing that the president may or may not do,” @PressSec says.

“We are maintaining that we have a number of options, and all of those options are still on the table,” Sanders told reporters Wednesday afternoon. “The final decision hasn’t been made on that front.”

Trump tweeted about airstrikes and missiles to punish Syrian dictator Bashar Assad for using chemical weapons on his people over the weekend, reportedly killing at least 40.

Russia vows to shoot down any and all missiles fired at Syria. Get ready Russia, because they will be coming, nice and new and “smart!” You shouldn’t be partners with a Gas Killing Animal who kills his people and enjoys it!

….doing things that nobody thought possible, despite the never ending and corrupt Russia Investigation, which takes tremendous time and focus. No Collusion or Obstruction (other than I fight back), so now they do the Unthinkable, and RAID a lawyers office for information! BAD!

“That’s certainly one option, but that doesn’t mean it’s the only option, or the only thing that the president may or may not do,” Sanders told reporters when asked about airstrikes.

When pressed, Sanders also denied that Trump is telegraphing his actions, something the president criticized his predecessor, Barack Obama, for doing regarding military action.

“Just because he does one thing doesn’t mean he can’t do a number of other actions as well, and he certainly hasn’t laid out the timetable, which would be broadcasting his intentions,” she said.

Trump ordered airstrikes on Syria in April 2017 to respond to another chemical attack by Assad thought to have killed at least 80 at the time.

Despite the latest chemical attack, Syria is scheduled to chair next month’s United Nations disarmament forum on chemical and nuclear weapons. Sanders said she did not have any information about whether the United States would consider boycotting the forum.

“The idea that Syria, which has repeatedly used chemical weapons against civilians in violation of the 1993 Chemical Weapons Convention, will be president of the U.N. Conference on Disarmament is outrageous,” The Heritage Foundation’s Brett Schaefer, a U.N. expert, told The Daily Signal. “It is doubly outrageous since the convention is a product of the Conference on Disarmament.”

The U.S. should refuse to send an ambassador to the forum, Schaefer said.

In response to a question, Sanders said diplomacy with Syria was still an option.

Russia, which has supplied and propped up Assad, continuously has been a “bad actor” in defending Syria in the United Nations, she said.

Russian President Vladimir Putin also worked out a deal during the Obama administration that Syria has not honored regarding removal of its chemical weapons, she noted.

To a question on whether Russia is now an enemy of the U.S., Sanders responded, “That’s something that Russia needs to play a role in determining.”