US Cruise Missiles Strike Air Base in Syria 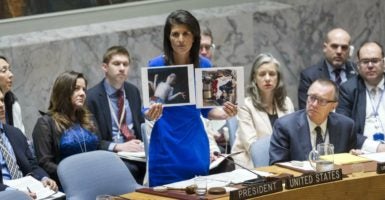 U.N. Ambassador Nikki Haley holds up photos of victims of the chemical weapons attack in Syria during her remarks Wednesday to the United Nations Security Council. (Photo: UN Photo/Rick Bajornas/Sipa/Newscom)

The United States fired dozens of cruise missiles at an airfield in Syria that military officials said was the source of the poison gas attack by the Assad regime that killed at least 80 civilians less than 48
hours earlier.

“No child of God should ever suffer such horror,” @POTUS says.

President Donald Trump said he ordered the airstrikes Thursday night in response to the chemical weapons attack Syrian dictator Bashar Assad carried out on his own people.

“Using a deadly nerve agent, Assad choked out the lives of helpless men, women, and children,” Trump said of the victims of what was believed to be sarin gas, speaking briefly around 10 p.m. from his Mar-a-Lago estate in Florida.

“No child of God should ever suffer such horror,” the president said.

The Associated Press reported that 59 Tomahawk missiles hit the Shayrat air base in central Syria at 8:45 p.m. EDT, or 3:45 a.m. Friday in Syria.

The missiles were fired from two destroyers, the USS Ross and USS Porter, in the Mediterranean, Fox’s Jennifer Griffin reported. A missile is fired at the base in Syria from the USS Porter in the Mediterranean Sea.
(Photo: U.S. Navy/Sipa USA/Newscom)

In his remarks, Trump said:

Tonight I ordered a targeted military strike on the airfield from which the chemical attack was launched. It is in the vital national security interest of the United States to prevent and deter the spread and use of deadly chemical weapons. There can be no dispute that Syria used banned chemical weapons, violated its obligations under the chemical weapons convention, and ignored the urging of the U.N. Security Council.

Trump went on to ask for a coalition to assist the United States in opposing Assad and terrorism “of all kinds.”

“Tonight I call on all civilized nations to join us in seeking to end the slaughter and bloodshed in Syria and also to end terrorism of all kinds and all types,” Trump said.

During the presidential campaign, Trump positioned himself as a noninterventionist and years before entering the race had warned his predecessor, President Barack Obama, not to intervene in Syria.

But during a Rose Garden press conference Wednesday, Trump said his attitude toward Assad and Syria had changed after he saw the carnage, especially the horrible deaths of children and infants, in the rebel-held town of Khan Sheikhoun.

Putin has supported and supplied the Assad regime in Syria’s 6-year-old civil war.

Hundreds of U.S. troops are on the ground in Syria as part of the fight against the Islamic State terrorist group, also known as ISIS, based in Raqqa in the north and central part of the country.

The strike on the airfield occurred just after Trump said goodnight to Chinese leader Xi Jinping, who is visiting Mar-a-Lago for talks with Trump this weekend, Roberts reported.

Trump did not state whether American policy now supports regime change in Syria.

Last week, Secretary of State Rex Tillerson said the fate of Assad is up to the Syrian people.

However, earlier Thursday, Tillerson said: “There would be no role for him to govern the Syrian people.”

Trump also did not answer a reporter’s question about his legal authority to launch the strike.

Obama, despite a 2012 warning that Assad’s use of chemical weapons would be a “red line,” opted to seek congressional approval—which he never got—to launch an airstrike after a chemical weapon attack that killed hundreds of civilians near Damascus in 2013.

Afterward, Assad said he would give up his chemical weapons and Russia was supposed to help ensure that happened.

Members of Congress registered their initial reaction to Thursday night’s strike over Twitter.

"Be sure of this: The wicked will not go unpunished" Proverbs 11:21 #SyriaChemicalAttack

Senate Foreign Relations Chairman Corker was consulted by Trump admin prior to use of military force, per aide. His statement —-> pic.twitter.com/IPAW2d1aUN

My statement on tonight's U.S. missile strikes in Syria pic.twitter.com/nLcHq6jS01

This action in Syria was appropriate and just.

Other lawmakers opposed the action:

The President needs Congressional authorization for military action as required by the Constitution.

James Carafano, a national security expert at The Heritage Foundation, said limited attacks are not the solution in Syria.

“Culpability here goes beyond Assad to the Russian and Iran regimes, which support this despicable behavior,” @JJCarafano says.

“A limited punitive strike certainly sends a powerful message that Assad’s behavior is beyond the pale of what is acceptable,” Carafano told The Daily Signal. “The U.S. is fighting with allies in the region to defeat ISIS to protect innocents from these kinds of atrocities. There is no reason why Assad should expect the international community to stand by while he does worse.”

Carafano, a Heritage vice president who oversees the think tank’s Davis Institute for National Security and Foreign Policy, said “the solution must be long term and part of a political process that holds the regime accountable.” He added:

Culpability here goes beyond Assad to the Russian and Iran regimes, which support this despicable behavior. Particularly abhorrent are the actions from Russia, which frustrated action in the U.N. Security Council and spread disinformation to cover up the [Assad] regime’s culpability.

Later Thursday night, Tillerson said the strikes do not indicate a change in the Trump administration’s policy on refugees from Syria.

“I would not in any way attempt to extrapolate that to a change in our policy or posture relative to our military activities in Syria today,” the secretary of state said, adding:

There has been no change in that status. I think it does demonstrate that President Trump is willing to act when governments and actors … cross the line on violating commitments they’ve made and cross the line in the most heinous of ways.