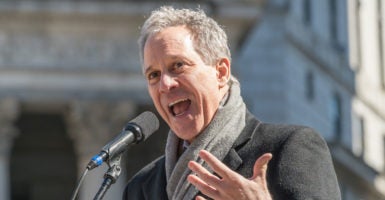 “With immigrant communities already living in fear, demanding citizenship status would drive them into the shadows, leading to a major undercount that threatens billions in federal funding for New York and our fair representation in Congress and the Electoral College,” says New York Attorney General Eric Schneiderman, who is leading a coalition of Democratic cities and states that is suing the Trump administration. (Photo: Albin Lohr-Jones/Sipa USA/Newscom)

A coalition of Democratic cities and states led by New York Attorney General Eric Schneiderman sued the Trump administration Tuesday, claiming the addition of a citizenship question in the decennial census survey violates federal law and the Constitution.

The lawsuit says the inclusion of a citizenship question violates both the Constitution’s command to count all persons during the census and the Administrative Procedure Act. The complaint was filed in the U.S. District Court for the Southern District of New York, the federal trial court in Manhattan.

“One of the federal government’s most solemn obligations is a fair and accurate count of all people in the country, citizen and non-citizen alike,” Schneiderman said in a statement. “With immigrant communities already living in fear, demanding citizenship status would drive them into the shadows, leading to a major undercount that threatens billions in federal funding for New York and our fair representation in Congress and the Electoral College.”

The plaintiffs claim the citizenship question “will fatally undermine the accuracy of the population count and cause tremendous harms to plaintiffs and their residents.” As such, they stand to lose federal funding and representation in the House of Representatives unless the citizenship question is removed from the questionnaire. They further allege the policy compromises their ability to comply with constitutional “one man, one vote” standards, which require equal populations among legislative districts.

The suit notes minority communities are typically undercounted in the census. An internal agency report cited in the filing found 1.5 million minorities went uncounted in the 2010 census. The addition of a citizenship question, they fear, will exacerbate this problem. Former U.S. Census Bureau directors of both parties have historically supported the exclusion of questions relating to citizenship and legal status on this basis.

They fear these risks are magnified by the administration’s hawkish immigration positions, which could incentivize noncitizens to lie on census forms or avoid the process altogether.

“These well-documented risks of adding a person-by-person citizenship demand to the decennial census are heightened in the current political climate because of President Trump’s anti-immigrant rhetoric and this administration’s pattern of policies and actions that target immigrant communities,” the lawsuit reads.

It also criticizes the agency process by which the question was added, claiming the decision was made without informed, well-considered input and contravenes decades of established policy. Such action is arbitrary and capricious, in violation of the Administrative Procedure Act.

The Trump administration will file its response in the coming days. In a memo to the undersecretary for economic affairs at the U.S. Department of Commerce, Secretary Wilbur Ross explained federal prosecutors need accurate and complete citizenship data to enforce voting rights laws. The Commerce Department oversees the Census Bureau.