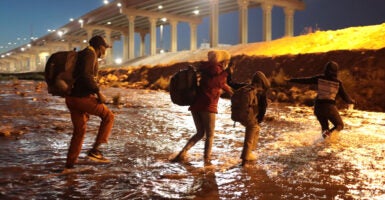 A family from Haiti crosses the Rio Grande in Juarez, Mexico, March 30, 2021, to surrender to the U.S. Border Patrol and to request political asylum in the United States. (Photo: David Peinado/NurPhoto via Getty Images)

If AmeriKKKa is so bigoted, why do Africans and Caribbeans leave black-run, predominantly black nations and come to the United States of America, which the Democrat left condemns as Earth’s headwaters of “systemic racism” and white supremacy?

According to the most recent Department of Homeland Security data, 548,891 African immigrants became permanent U.S. residents between 2015 and 2019. In 2020, these were the top 10 African sources for such new green card holders —plus each nation’s black population percentage, courtesy of the CIA “World Factbook.”

Each of these African nations yielded more permanent residents to America in 2020 than did the 944 from Sweden. Largely blond, blue-eyed Sweden is 82.3% white. Swedes, at least ethnically, are precisely the type whom a “systemically racist,” white supremacist nation would greet with pompoms aflutter. And yet Swedish green card recipients totaled fewer than half of those from Sudan.

Between 2015 and 2019, Caribbean green card awardees totaled 816,522. They, too, swapped black-ruled islands for this allegedly racist superpower. Here is 2020’s top five snapshot:

Each of these Caribbean islands generated more new green card bearers than the 410 who hailed from Denmark, a Scandinavian nation whose 86.3% white population is just what U.S. “systemic racism” would demand. But more St. Lucians than Danes decided to call America home.

So, if America is so irretrievably racist, why does it keep giving green cards to these Africans and Caribbeans? Coping with native-born black Americans should keep “systemic racism” plenty busy. Why would it import even more blacks?

It should be incredibly easy for “systemic racism” to deny these people visas, long before green cards entered the picture. Every application from a Kenyan or Haitian who wanted in could be nixed by a systemically racist consular officer at the corresponding U.S. Embassy. Surely, the State Department is “systemically racist.” And yet, these visas for black foreigners keep getting approved.

Is “systemic racism” on the fritz?

Beyond legal immigration, which “systemic racism” could control, African and Caribbean illegal aliens keep running across America’s borders and breaking into this country without permission. Between 2015 and 2019, DHS apprehended 16,210 African illegal aliens, including 9,003 from the 10 nations analyzed above. During those years, 14,534 illegal aliens came from the five aforementioned Caribbean states.

It’s much harder for “systemic racism” to control this illegal black influx. But beyond that, one wonders why these Africans and Caribbeans leave their majority-black nations to penetrate Earth’s supposed headquarters of anti-black bigotry.

Moreover, they do so while risking drowning in the Rio Grande, rattlesnake attacks, Gila monster bites, fatal dehydration amid cacti, and robbery and rape by human traffickers. Why would blacks overseas confront these dangers merely to be crushed beneath the cold, hard heel of America’s racist boot?