US Must Tread Carefully in Engaging Robert Mugabe’s Successor 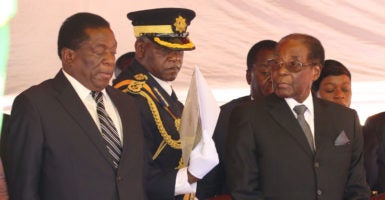 A dictator leaving office is always cause for celebration. So when a November 2017 coup unseated Robert Mugabe as president of Zimbabwe after he had spent 37 years blighting that country, it was impossible not to cheer.

However, as I wrote last year after the coup, that elation should not tempt the U.S. into prematurely engaging with Emmerson Mnangagwa, Mugabe’s replacement. Since being ensconced by the Zimbabwean military, Mnanangwa has promised reform, including a free and fair election this year.

Yet he is a long-time stalwart of the kleptocratic and authoritarian ruling ZANU-PF party. He should not be trusted until he proves he is breaking from Mugabe-style misrule.

Sens. Jeff Flake, R-Ariz., and Chris Coons, D-Del., recently proposed a bill that charts a positive way for the U.S. to approach a leader with as violent and ruthless a history as Mnangagwa. It reaffirms current U.S. restrictions on support to the government of Zimbabwe, and lays out a number of steps the government must take before the U.S. would consider political or economic engagement with the regime.

The bill also urges the government to start a much-needed reconciliation process in the country, and calls for sanctions on any Zimbabwean who tries to subvert the elections or other democratic processes.

Such skepticism of the new regime is warranted. Until a falling out with Mugabe last year, Mnanagagwa was one of the dictator’s most enthusiastic enforcers. He was an architect of the 1980s Gukurahundi massacre of civilians in opposition areas.

In 2002, the United Nations named him as part of a network that looted $5 billion from state-owned mines in the Democratic Republic of Congo, and he dodged U.N. sanctions in 2008 thanks only to Chinese and Russian protection at the Security Council.

The U.S., however, did sanction him in 2003 and reaffirmed the sanctions in 2005 for “undermining democratic processes or institutions.” That did not stop Mnangagwa from allegedly organizing the bloody crackdown on the political opposition during Zimbabwe’s 2008 elections.

The onslaught was so bad the opposition leader at the time called on his supporters to, for their own safety, refrain from voting in the run-off round of the election.

The international community rushing to increase its diplomatic and economic engagement with the Zimbabwean government would likely help Mnangagwa feed the ZANU-PF patronage networks he needs to consolidate power.

It would also signal to Zimbabweans that the international community—whose engagement will be necessary to ease the ZANU-PF and Mugabe-created economic misery in the country—believes Mnangagwa is the right man to lead Zimbabwe, when his previous behavior strongly suggests otherwise.

China supports Mnangagwa, as it did Mugabe, which will likely undermine the effectiveness of an accountability-based approach to the Zimbabwean government. Yet the U.S. should as much as possible avoid enabling nasty regimes, and Flake and Coons’ bill would ensure the U.S. does not. The bill may also influence some of our international partners who are considering increased engagement with Zimbabwe to instead take a similarly cautious approach.

Finally, adopting the strategy the bill calls for could influence Zimbabwe toward accountable governance, by making clear that the only way to reap the many benefits of full American engagement is through meaningful reform.

Such an outcome would be positive for U.S. interests and a victory for the many Zimbabweans who for decades have struggled for a free Zimbabwe.