Why Pakistan Must Act to Reassure India After Terror Attack 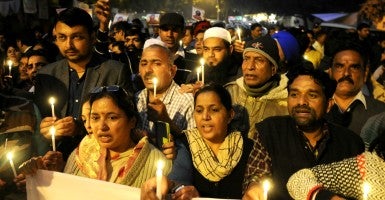 The attack on the Indian air base at Pathankot, which started on Saturday and lasted four days, was likely perpetrated by a Pakistan-based terrorist group and aimed at derailing Indo-Pakistani dialogue scheduled for next week. To keep those talks on track, Pakistan must act quickly on leads against the attackers that Indian authorities have reportedly provided to their Pakistani counterparts.

On Saturday, a group of at least six gunmen (disguised in Indian army uniforms) entered the residential section of the air base and began shooting. Seven Indian troops were killed and 22 wounded in the ensuing battle.

Spread over 2,000 acres, the base is located about 20 miles from the Indo-Pakistani border in the state of Punjab, holding a strategic location on the highway that connects the Indian state of Jammu and Kashmir with the rest of the country. The sophistication of the attack and its boldness in targeting a strategic air base outside Jammu and Kashmir suggests detailed planning and training and probable logistics support from outside India.

The Indian government has blamed the Pakistan-based Jaish-e-Mohammed (JeM) terrorist group for the attack, but a coalition of Kashmiri militant groups called the United Jihad Council (UJC) also claimed responsibility.

Both the JeM and the UJC operate freely in Pakistan, and their leaders regularly make public statements calling for jihad against India and hold public rallies to motivate their followers.

The leader of JeM, Masood Azhar, who spent time in an Indian jail in the 1990s but was later released to end a hijacking stand-off, received a hero’s welcome when he returned to Pakistan shortly after the hijacking incident in Dec. 1999. Azhar then established the JeM, which was blamed for an attack on the Indian parliament in Dec. 2001 that led to a six-month military stand-off between India and Pakistan.

While he had lain low for several years after the 2003 Indo-Pakistani ceasefire took effect, the Pakistani authorities allowed Azhar to resurface in early 2014 to address a large public rally, where he called on suicide attackers to resume jihad against India.

The Pathankot attack is disturbing on many levels, but mostly because it occurred just one week after Indian Prime Minister Narendra Modi made a bold surprise visit to Pakistan to meet with Pakistani Prime Minister Nawaz Sharif on Christmas day, demonstrating both leaders’ commitment to making peace.

India understands all too well from its experience with the 1999 Kargil conflict the importance of the Pakistan Army being closely involved in any Indo-Pakistani engagement.

Indeed, there appears to be no logical reason why the Pakistan military establishment would support the Pathankot attack, especially when it has its hands full conducting counterinsurgency operations on its western flank along the border with Afghanistan. Still, the onus is on Pakistan to track down the leads provided by India and to take action against the groups involved in the attack.

So far, both sides are taking steps to calm tensions. Indian leaders have restrained their rhetoric, and Sharif spoke by phone on Tuesday to Modi, vowing quick action on the leads provided by the Indian government.

India would certainly be justified in calling off the talks. But Indian leaders must weigh whether that is the best response, given that it would fulfill the goal of the terrorists.

If, however, Pakistan fails to cooperate with investigations against the attackers, New Delhi (and the rest of the world) will be left to conclude that the attacks were at least tacitly supported by powerful elements in the security establishment, and thus the time is not ripe for dialogue.

The ball is clearly in Pakistan’s court, whether it wants it or not.