Omnibus Spending Bill Was a Giant Giveaway to the Swamp 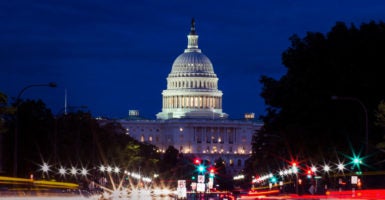 These four people wrote a 2,232-page bill that spends $1.3 trillion without any meaningful input from the rest of the members of Congress. Virtually no debate and absolutely no substantive amendments were allowed. It was presented to the rest of us in Congress on a take-it-or-leave-it basis.

This is just part of the reason I voted no.

For those of you who are concerned about government spending: This bill increases spending by over $250 billion from what we agreed to spend in 2011 and it sets us on a path for a trillion-dollar deficit either this fiscal year or the next.

And it is chock full of special-interest giveaways that could not have passed in the light of day.

It includes the CLOUD Act, which allows foreign governments to demand your data from United States companies. This bill never received a hearing or a mark-up in committee, but some lobbyist was able to convince our Senate and House leaders to slip it into this bill.

As bad as this bill is, unfortunately it is just business as usual here in Washington. This is the sixth last-minute spending bill Congress will have passed over the last six months.

That means there have been six times over the past six months that congressional leadership has chosen to fund our $4 trillion by last-minute, take-it-or-leave-it spending bills. No debate or amendments allowed.

This is no way to run a government. We need to do better. We need to go back to voting on smaller individual appropriations bills.

Let’s vote on a spending bill that funds just the Department of Defense. Let’s spend the time to have a debate and allow for amendments.

Let’s do the same for the Department of Homeland Security. And then for Veterans Affairs. And then for Transportation. And Interior. And on and on.

Yes, this process would force my colleagues and I in the Senate to work harder. Instead of working just four days a week like we do now, we might have to work five or maybe six days a week.

We never even tried that. Not once. We did hold one vote on a defense spending bill. And yes, the Democrats did vote to block that debate.

But instead of staying on that bill and forcing them to explain why they were voting not to fund our troops, we just moved on to other business. We didn’t even try to fight.

Our House and Senate Appropriations committees should immediately begin work on the fiscal year 2019 spending bills. When the House has passed its first appropriations bill, the Senate should bring its corresponding bill to the floor.

Let’s force the Democrats to actually filibuster next year’s spending bills. Let’s force them to stay on the floor for hours, for days, even for weeks if necessary.

It will be tiring. It will be painful. But eventually they will cave. And if we don’t take this difficult path, we will be right back in this same position this October.