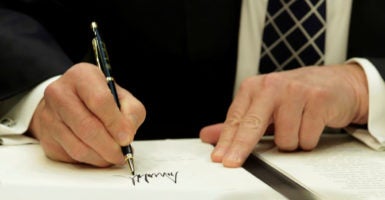 The federal government does not make America great, and never has.

Americans make America great, and they can best do the job when meddlers, busybodies, and crony privilege seekers in Washington get out of the way.

Getting out of the way means cutting high and uncompetitive tax rates, eliminating those regulations that are ineffective and costly—but it also means allowing businesses and consumers the freedom to choose which products and whose products they want to buy.

In its first year, the Trump administration has exceeded all expectation on the first two legs of freeing up our economy. However, the administration is taking a huge step backward when it comes to trade.

Economic freedom—the freedom of people to make their own decisions about what to produce, where to work, and how to spend their own money—is strongly linked to economic well-being. The freedom to trade is a key component of economic freedom, and evidence shows it is a powerful force for growth and prosperity.

Make no mistake: Tariffs are taxes, and trade restrictions are regulations. Both have been used for centuries to transfer wealth from the politically impotent to the politically powerful. A weaker economy is the booby prize.

However well-intentioned proponents of “fair trade” might be, when the movement gets run through the D.C. lobby mill, it comes out as a special-interest smoke screen—the same hogs at the same trough with new lipstick. The real goal of these groups is more monopoly power, not freer or fairer trade.

Even if fairer trade were the goal, a blitzkrieg of tariffs and restrictions is not the cure. A trade policy that attempts to match every subsidy or regulation of a trading partner with an offsetting tariff or counter regulation would create an impossible mess even without special-interest rent-seeking.

The best car for a bumpy road is one with the most adaptable suspension, not one where the designers try to engineer bulges in the tires to match every pothole.

In the same way, it is better to allow consumers and producers the freedom to make their own choices for adapting to a messy world economy. Turning the project over to an army of bureaucrats would be disaster. Giving the project to political cronies is worse yet.

Are our trading partners paragons of economic virtue? Of course not. For that matter, it is nearly impossible to find a state or locality that has not also given subsidies, tax preferences, and development waivers to select businesses (look to the unseemly competition for Amazon’s HQ2 for a notable example).

Raising taxes for some while giving carve-outs and subsidies to others is a bad way to run any economy, whether it be national, state, or local. Certainly, the bad effects can spill over to other countries, states, and localities, but the damage will only be magnified if they impose taxes on their own businesses and citizens in a misguided attempt to neutralize the spillovers.

That there are few, if any, countries that are pure free traders may be an argument for narrowly targeted trade agreements, but it is not an argument for further burdening our own economy. At best, this strategy turns our economic policies into subordinate, reactive derivatives of the policies set by other countries. At worst, it unleashes all the swamp creatures on the productive parts of our economy.

The Trump administration should allow more time for its admirable tax and regulatory reform to work before it resorts to tried-and-failed trade policies. Even so early in the game, trusting in economic freedom with lower taxes and deregulation has shown remarkable results—bonuses, pay raises, increased investment, and high business confidence.

Trusting in bigger government in the form of tariffs and trade interference only undercuts the benefits of these pro-growth policies. Let Americans, not government, make America great.