A Truce in the Trade War Is Good News. Trump Can Make It Better by Scrapping the Tariffs. 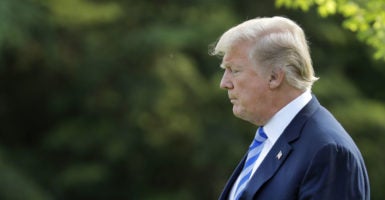 President Donald Trump's tariffs have caused domestic steel and aluminum prices to spike by as much as 40 percent in just a few months. (Photo: UPI/Newscom)

Treasury Secretary Steven Mnuchin announced this week that the U.S. and China had agreed to cool down the brewing trade war, following a joint statement from U.S. and Chinese officials. That’s a positive first step.

Mnuchin confirmed that the planned tariffs under Section 301 of the Trade Act of 1974 on $150 billion of Chinese exports “are on hold,” a move that’s sure to ease uncertainty for U.S. manufacturers and agricultural producers.

Now that the administration has established what seems to be productive dialogue with China on bilateral trade concerns, it’s time for President Donald Trump to stop hurting American manufacturers—and our closest allies—with additional tariffs on steel and aluminum.

The administration argued that these tariffs, which were imposed on March 8 under Section 232 of the Trade Expansion Act of 1962 on nearly all foreign exporters, were necessary to combat Chinese overcapacity.

Owing to the global nature of the steel and aluminum tariffs, domestic prices have become increasingly volatile, spiking by as much as 40 percent in just a few months.

Higher prices are causing a quick ripple of negative effects throughout the domestic economy. The Department of Commerce has received more than 8,000 requests for product exemptions from domestic companies, and that number continues to grow each day.

The sheer volume of exemption requests alone proves that imposing such broad tariffs was a mistake.

On June 1, country exemptions for Canada, Mexico, and the European Union will expire, and it’s unclear if preliminary agreements in principle with Australia, Argentina, and Brazil will be finalized by this time.

American users of steel and aluminum do not need another month’s extension on country exemptions or swifter processing of the thousands of product-exemption requests. These manufacturers need real relief from government intervention.

Before the June 1 deadline, Trump should announce a full removal of tariffs imposed under Section 232, and any country exemption agreements already in effect should be nullified.