Jobs Are Booming, but Tariffs Could Be Bad News 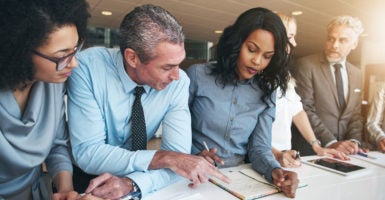 The Bureau of Labor Statistics delivered some good economic news this morning, announcing that the economy added 313,000 jobs in February.

This came in the bureau’s Employment Situation Summary, and provides strong evidence to support the White House’s pro-growth policies and encourage more of the same.

In addition to the job boost, the unemployment rate remained at a low 4.1 percent (the lowest since 2000), and many of the jobs created were in the crucial construction, manufacturing, and mining sectors. The civilian labor force rose by over 800,000, and the labor force participation rate increased by three-tenths of a point over the month to 63 percent.

The bureau also announced that it had revised employment numbers from December and January to show that 54,000 more jobs had been added than previously reported. This means that over the last three months, the economy is averaging 242,000 jobs created, and nearly 3 million jobs have been added since President Donald Trump took office.

The number of people marginally attached to the workforce (that is, discouraged workers currently not looking for work because they believe no jobs are available for them) has fallen by nearly 150,000 from this same point last year, and the number of employed black Americans is hitting record highs.

This good news points to one glaring fact: The tax cuts, deregulation, and Trump’s willingness to apply pro-growth policies are leading America into a new age of prosperity.

Despite all this good progress, it’s troubling to now see the White House embrace trade policies that could potentially stunt the growth we are currently enjoying. The president’s tariffs on steel and aluminum imports could potentially kill jobs in steel-using industries.

Why we would want to risk growth for an outcome that is uncertain at best, and job-killing at worst?

We should enact policies that step on the gas rather than pump the brakes. Tariffs are effectively a tax increase on average Americans, and by imposing them, we are putting our own economic growth in danger.

There’s no doubt the latest jobs report is a positive sign that our economy is booming. But the White House should pay attention to what got us here, and do more of it. Forget the tariffs.