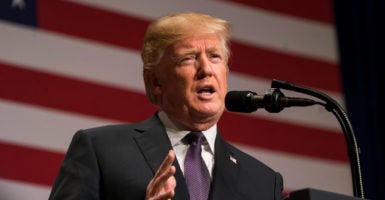 In response to the president's new tariffs, South Korean company LG announced it would raise prices on some of its washers and dryers sold in the U.S. (Photo: Jim LoScalzo/CNP/AdMedia/Newscom)

These tariffs are a major misstep by the administration. They will negatively affect the lives of Americans in at least the following five ways.

The Solar Energy Industries Association estimates that these solar tariffs “will cause the loss of roughly 23,000 American jobs this year, including many in manufacturing, and it will result in the delay or cancellation of billions of dollars in solar investment.”

Jobs at Sears Corp., one of the longest-standing bastions of the American service industry and a major supplier of washers in the U.S., are also at risk as a result of the tariffs on washers.

Sears recently awarded a contract to LG for the production of some of Sears’ own Kenmore brand of washers. LG’s Kenmore washers are imported from South Korea, a U.S. trade partner that was not exempt from the president’s actions. Making it more expensive for LG to import the washers it produces for Kenmore, one of Sears’ most popular product lines, will jeopardize the retailer’s efforts to revitalize its brand.

During a recent Heritage Foundation event, Paul Nathanson of Bracewell noted that “the purpose of tariffs is to raise the price of a product.” This statement is already proving to be true.

A memo from LG to U.S. retailers relayed that “[a]s a result of the trade situation, we will be initiating pricing actions, which will be sent under separate cover shortly.” LG is expected to “raise published retail prices on at least some of its washer and dryer models by approximately $50.”

A common misconception with the new tariffs is that they target unfairly traded goods from China.

While imports from China will be restricted, these tariffs actually apply to imports from every country. The only exception is Canada, which was exempt from the tariffs on washers. This means that imports of solar panels and modules, as well as washers, will be penalized even if they are being sold at market value.

The debate over tariffs boils down to whether government should override consumer choices in the marketplace. Limiting choices for solar panels, modules, and washers for Americans forces them to pay more for what is available.

Following President George W. Bush’s decision to impose tariffs on steel imports in 2002, the European Union threatened to retaliate with tariffs on American goods from vital states for the next presidential election, such as orange juice, textiles, and Harley-Davidson motorcycles.

Within days of Trump’s new tariffs on solar panels, modules, and washers, South Korea—one of America’s free trade partners—filed consultation requests with the World Trade Organization. According to the Financial Times: “South Korea’s request for consultations means that, unless it backs down in the next 60 days, the U.S. will face a potentially bitter fight at the [World Trade Organization].”

5. More tariffs in the future.

Imposing tariffs unilaterally sets a dangerous precedent. Tariffs should not be used to reward companies and industries that prioritize lobbying the government over innovation.

With these tariffs, the administration has opened the door for more companies to petition the International Trade Commission for tariffs to protect their own special interests.

The U.S. government has self-initiated investigations into imports of steel and aluminum imports under Section 232 of the Trade Expansion Act, a law that allows the president to impose tariffs for national security reasons. A decision on steel and aluminum tariffs is expected in the coming weeks.

While we will not know the full consequences of these tariffs for many months, the choice to reward special interests over the American economy as a whole was a poor one. It should not be the role of the president, or Congress, to tip the scale toward one American industry or interest group over another.

Let’s hope these tariffs are removed before too much of the projected damage is done.