‘Satisfactory Deal’ With China Could Lead to Lifting of Tariffs, Kudlow Says 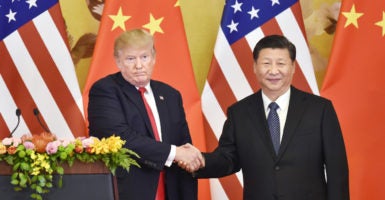 President Donald Trump and Chinese President Xi Jinping shake hands during a joint press conference at the Great Hall of the People in Beijing in November 2017. The two will meet again later this month at the Group of 20 summit and discuss trade. (Photo: Kyodo/Newscom)

The announcement by economic adviser Larry Kudlow came ahead of the meeting between Trump and Chinese President Xi Jinping at the Group of 20 summit in Buenos Aires on Nov. 30 and Dec. 1.

“If we get a good, satisfactory deal, [Trump] won’t impose new tariffs. He might even remove some tariffs,” Kudlow told reporters outside the White House on Thursday. “But that requires a very satisfactory deal. Those are his words, not mine.”

The Trump administration was reportedly considering imposing new tariffs of $257 billion on Chinese imports if such a deal is not struck.

Kudlow stressed that Trump wants to see the Chinese response improve and “deliver the goods,” as China has been known for unfair trade practices and theft of intellectual property.

“They start playing by the rules—then, yes, tariffs could be removed. That’s a big ‘if,’” Kudlow said.

In the first round, the U.S. placed a 25 percent tax on $34 billion worth of goods imported from China. China responded by doing the same, mostly targeting agriculture products.

The U.S. later put a 25 percent tax on an additional $16 billion worth of imports. China responded with tariffs on chemicals, gas, additional motor vehicles, and fuel oil imported from the United States.

Most recently, the U.S. raised the tariff from 10 percent to 25 percent on an additional $200 billion worth of goods, set to take effect in January.

Further, 65 percent of American companies in China don’t plan to relocate back to the United States because of tariffs, but are more likely to consider somewhere else in Southeast Asia.

Asked about the survey, Kudlow told The Daily Signal the tariffs haven’t been in place for very long, so it’s difficult to assess their impact as of yet.

“From our view, we’re booming,” he later added about the U.S. economy. “China is not.”

The economic adviser was upbeat about a phone conversation Trump and Xi had.

“It was a very positive tone. They did talk trade,” Kudlow said. “In my opinion, it’s always better to talk than not to talk. It looks they are focusing on trade. … It does suggest when they meet again in Buenos Aires, they’ll have a bilateral, there may be more, and trade will be on the agenda.”

Noting that Xi will be giving a speech at a trade conference in Shanghai in the next week, Kudlow added, “I look forward to seeing what’s in there regarding trade. So, there may be a little thaw going on here.”