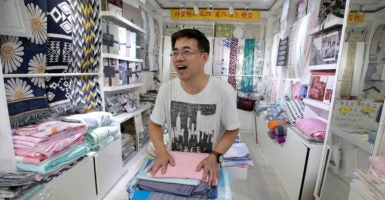 Zhao Baoxin, 61, is surrounded by colors and patterns Aug. 9 in his fabric shop in Beijing, China. (Photo: Jason Lee/Reuters/Newscom)

It’s been a year since the White House launched a trade war with China. On Aug. 14, 2017, President Trump instructed U.S. Trade Representative Robert Lighthizer to investigate Chinese policies under Section 301 of the U.S. Trade Act.

One year later, two important questions remain: What has Trump’s trade representative achieved, and how long will the trade war continue?

For now, there appears to be no end in sight. Instead of free and fair trade, with zero tariffs and zero barriers, the United States and China may end up less free and fair on trade.

First, over the past year, the U.S. government has increased some taxes on Americans who buy goods from China.

Round One ($68 Billion in Cross-Border Trade)

In July, the Office of the U.S. Trade Representative placed an additional 25 percent tax on $34 billion worth of goods imported from China. This does not include taxes on the import of washing machines, solar panels, steel, and aluminum imposed by the Trump administration.

Beijing responded by adding its own 25 percent tax on $34 billion worth of American exports to China. This list included mostly agricultural products such as soybeans, rice, and tobacco; farm products such as beef, pork, and chicken; and various fish, fruits, and motor vehicles.

Round Two ($32 Billion in Cross-Border Trade)

Starting Aug. 23, the Office of the Trade Representative and U.S. Customs and Border Protection will collect an additional 25 percent tax on $16 billion worth of other goods Americans buy from China.

Taxed items will include products such as turbines, furnaces, cranes, farming machines, batteries, rail parts, and other water vehicle and airplane parts.

Round Three ($260 Billion in Cross-Border Trade)

Earlier this month, the president instructed Lighthizer to consider increasing the tax on an additional $200 billion worth of Chinese goods from 10 percent to 25 percent. Trump quipped that he’d be willing to tax everything Americans buy from China.

Taxing $200 billion of goods would increase the cost of nearly half of everything Americans buy from China. The only major exclusions would be items such as toys, clothes, and some other consumer goods. These taxes could go into effect as soon as early September.

Because Chinese consumers import only about $130 billion worth of American products a year, Beijing can’t match a $200 billion tax dollar-for-dollar. But Beijing instead will plan on increasing taxes on roughly $60 billion worth of U.S. exports to China—roughly half of all U.S. products exported there. And these products will be taxed by an additional 5 to 25 percent.

In total, at least $360 billion worth of products of the $711 billion in cross-border trade in 2017 could see an increase in taxes by the end of this year.

Initial estimates put the potential effect of tariffs on imports from China and China’s retaliation, at upward of 450,000 American jobs lost.

Where We’ve Been, Where We’re Going

White House officials have made clear they want China to change, and it should. But it’s not clear what the administration really wants from China. And it’s hard to get where you want to go if you don’t know where that is.

When the president first asked Lighthizer to initiate the Section 301 investigation a year ago, his office said it would determine whether China:

The White House, however, has issued its own list of 12 demands on Beijing—some more unrealistic than the others.

Nor do these four concerns significantly address other demands made by the White House in May, such as market accessibility outside tech-related products

What is more, we have no clear metric by which to declare victory in the trade war with China. It is up to Lighthizer’s office to identify where China is making credible reforms in four targeted areas of concern if the tariffs are to be removed.

Even so, no credible measure exists to show whether the Chinese continue to pressure U.S. firms into transferring technology or make them victims of government-supported cyber intrusions.

So how can the two sides come to an agreement?

Derek Scissors, a resident scholar at the American Enterprise Institute, recently wrote that Washington and Beijing wouldn’t reach any meaningful agreement because any deal would last only until the 2020 presidential election cycle picks up—along with the anti-China, anti-trade rhetoric. With each passing week moving us closer to 2020, it’s more unlikely a deal will be made.

Perhaps this is why the administration continues to downplay the cost of the trade war with China. It fears that it will be a long one.

Beijing has shown no sign that it is willing to give in to U.S. trade threats. It was a misjudgment to ever think it would.

In the meantime, so long as both sides are unwilling to come to any agreement, even a short-term one, costs for Americans will continue to increase. And with more tariffs comes greater government involvement in Americans’ lives.

Instead of taking an approach that commits to conservative principles aligned with free trade, rule of law, and a limited government, the White House has committed to an approach more characteristic of Beijing—the use of economic leverage as a means of coercion.

It’s fair to say the only things the Office of the Trade Representative and the White House have achieved after one year waging a trade war against China is less free trade for America.