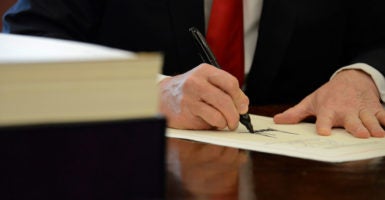 Most of the gifts exchanged at this time of year are opened on Christmas Day. But this time around, a big one arrived a few days early: the Tax Cuts and Jobs Act.

You’d never know that if you listen to the grinches in the so-called mainstream media, of course. They poured the usual amount of derision on it, insisting that it’s nothing more than a robber-baron’s roundup—a grab bag of goodies for the rich and no one else.

“A Win for the Wealthy, the Entitled and the Irresponsible,” read the headline of The Washington Post’s editorial. The New York Times, meanwhile, went with “Tax Bill Lets Trump and Republicans Feather Their Own Nests.”

Other media outlets followed suit, venting outrage at what they insist is nothing more than a sellout and a scam.

It isn’t. The Tax Cuts and Jobs Act isn’t perfect, but it offers real tax relief to Americans up and down the income scale. President Donald Trump’s opponents are so fixed in their class-warfare ways that they seem oblivious to how beneficial it will really be, to ordinary workers and to the economy as a whole.

Several high-profile businesses—ones with no ideological ax to grind, unlike many in the media—seemed to realize this. They immediately followed the announcement of the Tax Cuts and Jobs Act’s passage with a few welcome announcements of their own: bonuses for their employees, and plans to create more jobs.

Comcast reacted to the tax bill and to the repeal of net neutrality by saying that 100,000 of its employees will get a $1,000 bonus.

There were others—and more to come, you can be sure. “This is just the first wave of many such stories,” Heritage Foundation tax expert Adam Michel told The Daily Signal. “These announcements show that businesses across America will put their tax cut to good use.”

But actions speak louder than words, and the actions of many businesses show how tax relief can help all Americans, directly or indirectly. As the saying goes, a rising tide lifts all boats.

Will the rich benefit more than lower-income Americans? It depends on how you look at the numbers.

The rich pay the lion’s share of the tax burden, so they will see the largest dollar value in benefits.

However, the middle class sees the largest reduction in taxes paid: up to a 56 percent tax cut for some people.

Is this what the media means by Trump’s “tax cut for the rich?” News flash: Under this legislation, the wealthiest people in America will actually pay a larger share of total taxes. Liberals should be celebrating—our tax code is now more progressive than it was under President Barack Obama (not that that’s a good thing.)

Still, this is a win-win across the income spectrum. When you increase the standard deduction and the child tax credit, to cite two of the tax bill’s most notable features, you can’t help but lower the federal burden on many hardworking Americans—not just the wealthy.

Mind you, there’s still work to be done. There’s much we can do to simplify our Byzantine tax code, and make it flatter and fairer to all Americans.

But the Tax Cuts and Jobs Act is an excellent place to start. Something to think about next year, when your gift budget is a bit bigger than it was this year.