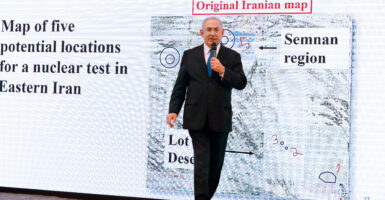 Iran is building an underground advanced centrifuge assembly plant at its Natanz nuclear facility, according to satellite images obtained by The Associated Press on Wednesday.

This is a significant development because once the plant is finished, Iran will start cranking out sophisticated centrifuges that will accelerate its uranium enrichment efforts and reduce the time needed to acquire enough material to arm a nuclear bomb.

According to the most recent report of the International Atomic Energy Agency, the U.N. agency that inspects Iran’s nuclear program, Tehran has accumulated a stockpile of 2,105 kilograms (2.32 tons) of low-enriched uranium as of Aug. 25.

Nuclear experts estimate that 1,050 kilograms (1.15 tons) of low-enriched uranium are required to be further enriched up to weapons-grade levels of 90% purity for one nuclear weapon. This breakout could take as little as three and a half months, if Iran decides to proceed at maximum speed using its declared nuclear facilities.

Iran’s new underground facility is designed to replace its primary centrifuge assembly plant, which was destroyed in a mysterious fire and explosion on July 1.

Although a previously unknown group, the “Cheetahs of the Homeland,” claimed responsibility for the destruction, anonymous sources later confirmed that the explosion was part of an Israeli covert sabotage campaign to delay Iran’s nuclear program.

While Israel officially has denied involvement in the sabotage, anonymous sources unofficially revealed to The Jerusalem Post that the purpose of the attack on the Natanz centrifuge plant was to send an unambiguous deterrent message to Iran that progress toward a nuclear weapon beyond certain red lines would not be tolerated.

By building an underground replacement for the centrifuge plant, Tehran is trying to put a key part of its nuclear program beyond Israel’s reach and trumpeting its defiance of the Trump administration’s maximum-pressure campaign to roll back Iran’s nuclear efforts.

The legislation would require the Department of Defense to consult Israeli officials and report to Congress on Israel’s deterrence capabilities, as well as the strategic benefits of such a transfer.

Gottheimer reportedly intends to introduce the bill, which is still being finalized, on Oct. 30.

The report argued that Iran’s increasing willingness to take risks to threaten U.S. interests and allies was a clear sign that deterrence was inadequate and needed to be bolstered.

It noted that Iran does not doubt U.S. military capabilities—but had doubts about Washington’s willingness to use them.

If a Biden administration were to return to the flawed 2015 Iran nuclear agreement, as presidential candidate Joe Biden has advocated, then U.S. deterrence against Iran would likely be further undermined.

The U.S. should give Israel the tools to defend itself by itself, if necessary.

That’s the logic behind the legal mandate imposed by Congress in 2008 for the U.S. to carefully maintain Israel’s Qualitative Military Edge over potential adversaries.

Iran’s uranium enrichment facility at Natanz is fortified under 25 feet of concrete. Its Fordow nuclear facility was built underneath a mountain, up to 300 feet underground.

The acquisition of Massive Ordnance Penetrators would give Israel options that it currently lacks to destroy those and other hardened underground sites.

Because its fighter-bombers are too small to carry the huge bombs, Israel also would require aircraft to deliver the weapon.

One possible option would be to transfer to Israel some of the B-52 bombers currently held in reserve or in long-term storage, which Israel could refurbish to deliver the bombs.

Israel might prefer to develop a less costly alternative to the B-52s, which in any case could not be delivered until after the expiration of the New START Treaty in February 2021, although that treaty might be extended.

In any event, Israel’s air force, well-known for innovation as well as for a higher tolerance for risk in military operations, is capable of coming up with imaginative solutions.

Sanctions alone are unlikely to permanently halt Iran’s nuclear program, just as they failed to halt North Korea’s. What is required is firm diplomacy backed by the credible threat of the use of military force.

The U.S. needs to augment its deterrence of Iran by maintaining a favorable regional balance of power and strengthening U.S. allies against Iran.

Transferring the Massive Ordnance Penetrator bombs would strengthen Israel’s military capabilities, enhance deterrence of Iran, and give Tehran additional incentives to compromise on the nuclear issue.

Such a transfer would send a strong warning to Iran that its nuclear weapons program will be ended—one way or another.

Time to Kill the Zombie Iran Nuclear Deal at U.N.

How U.S. Strike Against Iranian General Changes the Rules of the Game