How the Iran Deal Could Dangerously Undermine Our National Security 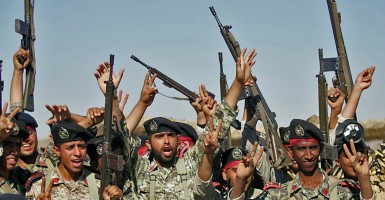 The emerging nuclear deal with Iran has numerous flaws that could dangerously undermine U.S. national security.

Particularly worrisome are provisions allowing Tehran to continue using uranium enrichment facilities at Natanz and Fordow, as well as the heavy-water reactor at Arak. The latter has been described as a plutonium bomb factory. All of these facilities, built covertly and housing operations prohibited by multiple U.N. Security Council resolutions, would be legitimized by the agreement.

Tehran not only gets to keep all its illegal nuclear facilities; it only has to mothball—not destroy—centrifuges used to enrich uranium. This means this rogue nation can quickly expand its enrichment activities and rapidly shorten its nuclear breakout timeline when restrictions on the number of centrifuges expire in 10 to 15 years.

Iran can quickly reverse all of its concessions if its mullahs decide to renege on the deal in the future. But sanctions on Iran, especially at the U.N., will take time to reimpose … if they can be reimposed at all. If the Russians or Chinese were to object, it would delay the inherent time-lag before sanctions could bite—or be defanged completely.

The elephant in the room that the Obama administration studiously avoids mentioning is Iran’s long history of violating its previous nuclear agreements.

President Obama insists that the deal includes “unprecedented verification.” “If Iran cheats, the world will know it,” he has said.

But how long will it take to find out that Iran is cheating? And will the world do anything about it after it has discovered cheating?

Look at Syria, where the Obama administration trumpeted its 2013 agreement to destroy all of the Assad regime’s chemical weapons. Yet today, that regime continues to use chlorine gas against its own people, with little fear of the consequences.

The administration has sought to ease anxieties about verifying Iranian compliance by stressing the role of the International Atomic Energy Agency. But the IAEA has access only to declared nuclear facilities, and it completely missed Iran’s covert nuclear program before it was revealed by an Iranian opposition group in 2002.

Another major problem: It is not clear that Iran will be required to come clean on the military dimensions of its nuclear program before a final deal is signed. Full disclosure on this matter is vital. Otherwise the U.S. will not be able to establish a baseline for the Iranian program that could serve as a reliable basis for estimating how long it would take Iran to stage a nuclear breakout.

Moreover, if Iran does not come clean on its past violations of its nuclear commitments, how can it be trusted to comply with any new commitments?

The nuclear deal also gives Iran billions of dollars in sanctions relief. That economic shot in the arm will bolster one of the most hostile and dangerous regimes in the Middle East.

A major risk of the easy terms given Iran is that it will embolden the regime to escalate its aggressive policies. At a minimum, it will have far more cash to finance terrorism and subversion.

And Iran already has announced its own version of the interim deal that significantly conflicts with the U.S. version of the deal. No wonder Iranian officials are celebrating the vague agreement as a major victory.

The bottom line is that the Obama administration has signed an agreement in principle with a regime that has no principles, except to expand its power and export its revolution.

Originally published in the Orlando Sentinel