This Law Makes It Harder to Live Overseas as an American. Congress Can Reverse It. 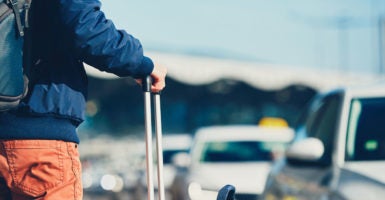 Under current law, financial institutions in other countries must report to the IRS about the account activity of their U.S. clients. (Photo: iStock Photos)

If you’re an American living overseas, Uncle Sam is making life hard for you—and he’s probably giving your bank a headache, too.

For one, the U.S. government often taxes the earnings you make outside the U.S., meaning you can be double-taxed—both by the U.S. and by your host country. But even if you don’t owe U.S. taxes, reporting your foreign earnings to the IRS can be expensive and complicated.

In addition to that, if you live overseas, your bank is probably quite annoyed at you and has an incentive to stop doing business with you.

Thanks to an Obama-era law, the Foreign Account Tax Compliance Act, any foreign bank or other financial institution—such as a brokerage firm—must report information to the IRS about their American customers’ account balances, deposits, and withdrawals.

But it’s a foreign institution, not beholden to the U.S. government—so how can the IRS do this?

Quite simple. If the institution doesn’t comply, the U.S. government will withhold 30 percent of any income or gross proceeds from U.S. assets that the American customer holds in their foreign account.

This causes headaches and time-consuming paperwork for both the financial institutions and their American customers. As a result of this policy, many foreign institutions have closed the pre-existing accounts of their American clients and refused to do business with Americans.

Some Americans have even resorted to renouncing their U.S. citizenship to get free from Uncle Sam’s constant nagging.

This might have you wondering, why would the U.S. government bully its own citizens this way?

The original goal of the law was to root out tax evasion by those the Obama administration considered “fat cats.” The problem is that the law’s heavy-handed measures treat every American abroad as a criminal—guilty until proven innocent—and treat foreign institutions as subservient to the U.S. government.

The effect of the law is to make Americans radioactive in the eyes of foreign financial institutions. For those Americans who lose service at foreign banks, the law has acted as a kind of economic sanction.

Pathetically, the law hasn’t even benefitted Uncle Sam’s coffers. The amount of tax revenue estimated to be collected by the Foreign Account Tax Compliance Act in its first decade barely exceed the amount that financial institutions have already spent complying with the law.

President Donald Trump and congressional Republicans have been superb at rolling back overregulation from the previous administration. The Foreign Account Tax Compliance Act is just one more overreach that needs to go.

Unfortunately, though, a repeal of the law is not included in the GOP’s tax reform framework. Lawmakers may intend to include this in the full proposal still to be released, but its absence in the framework is concerning.

Among the framework’s many positives, it does a terrific job of improving the tax climate for U.S. companies abroad. It calls for a territorial tax system, which means that all dividends from foreign subsidiaries of U.S. companies could be brought back to American shores tax-free.

This would reverse the practice of double-taxation mentioned earlier, allowing U.S. companies abroad to pay the same taxes as their local competitors and thus stay competitive. It would also keep them from domiciling themselves outside the U.S.

But even the territorial tax proposal isn’t perfect, as it mentions a possible minimum tax on U.S. companies wishing to move foreign profits to other countries with lower tax rates than the U.S.

This would only revert to a backdoor version of the current system, where the U.S. government chases down profits made overseas by U.S. multinational corporations.

The better path is to stick with other positive changes included in the GOP framework: lowering the corporate rate, allowing full expensing, and more.

But in making life easier for U.S. companies, Congress must not forget about individual Americans living abroad. Congress should give them relief, too, by including a repeal of the Foreign Account Tax Compliance Act in its final tax reform proposal.