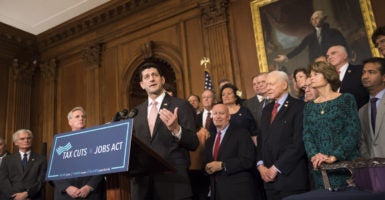 “As businesses and their competitors begin to increase investment in the U.S., workers' yearly wages will also go up,” The Heritage Foundation’s Adam Michel says of Republicans’ tax reform plan. (Photo: Kevin Dietsch/UPI/Newscom)

Multiple businesses are announcing bonuses and benefits for their employees due to Congress’ passage of Republicans’ tax reform bill.

“On behalf of all of our stakeholders, we applaud and thank Congress and the administration for their leadership in seizing this opportunity to unleash economic energy in the United States,” Dennis Muilenburg, Boeing chairman, president, and chief executive officer, said in a statement. “It’s the single-most important thing we can do to drive innovation, support quality jobs, and accelerate capital investment in our country.”

Comcast announced Wednesday that due to Republicans’ tax overhaul and the Federal Communications Commission’s repeal of Obama-era net neutrality rules, 100,000 employees will receive a $1,000 bonus.

“Based on the passage of tax reform and the FCC’s action on broadband, Brian L. Roberts, chairman and CEO of Comcast NBCUniversal, announced that the company would award special $1,000 bonuses to more than 100,000 eligible frontline and non-executive employees,” Comcast said in a statement.

“This is just the first wave of many such stories,” Adam Michel, policy analyst for economic studies at The Heritage Foundation, told The Daily Signal in an email. “These announcements show that businesses across America will put their tax cut to good use.”

The bill repeals Obamacare’s individual mandate, and also increases the current $1,000 child tax credit to $2,000 and gives a $500 credit for non-minor child dependents.

Even better news from the country’s businesses is yet to come, Michel added.

One-time bonuses are great news, but the real benefits are still in the future. As businesses and their competitors begin to increase investment in the U.S., workers’ yearly wages will also go up. It is the long-run benefits of tax reform through a larger and more dynamic economy that Americans should be most excited about.