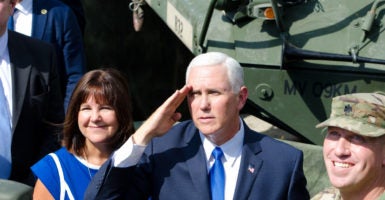 The U.S.- Georgian relationship was taken to a new level on Nov. 20, when President Donald Trump approved something that never occurred during President Barack Obama’s eight years in office. That would be an estimated $75 million deal to sell Javelin anti-tank missiles to the Eastern European republic of Georgia.

After 25 years of diplomatic relations between the two nations, Tbilisi is more deserving than ever to receive this kind of support.

Georgia is a beacon of hope for the Eurasia region and is a valued partner for the U.S. on a global scale. Since regaining its independence in 1991, Georgia has worked hard to reform its economy and governance—and with much success.

The country has had successive peaceful elections and is deeply committed to integrating into the West. According to The Heritage Foundation’s 2017 Index of Economic Freedom, Georgia is ranked 13th in the world for economic freedom, scoring even higher than the United States itself.

Georgia also has geostrategic importance for Europe’s energy security, since it’s a key transit country for oil and gas pipelines to Europe.

From 1991 to the present, Georgia’s democracy has been threatened by Russia in numerous ways—from hybrid warfare to invasion. Because of this, Georgia deserves the chance to defend its borders and its democracy against further Russian aggression. Thankfully, with the sale of these advanced anti-tank missiles, it can.

The weapons sale is important for two main reasons: symbolism and practicality. The sale is symbolic, because it demonstrates the U.S.’ support for Georgia and our alliance, while also being practical, because Georgia can use the weapons for deterrence.

In the next few weeks, the same decision should be made for Ukraine—to arm it with Javelin missiles to deter Russian aggression.

Perhaps the most important reason why Georgia deserves these weapons, however, is because it has proven itself to be a dependable and responsible ally of the United States.

An example of that stems from the war in Afghanistan. Georgia’s contribution has been the largest of any non-NATO member, with a total of 2,000 troops serving at the height of the war.

Today, Georgia still maintains more than 850 troops in Afghanistan. Georgian troops have experienced the highest per-capita death rates in Afghanistan, demonstrating their dedication to helping the U.S. in the war against terrorism.

It is important to note that Georgia is unlikely to utilize the weapons to try to take back its South Ossetia and Abkhazia regions, which Russia illegally has been occupying since 2008.

Since then, Russia has been involved in what is called a “creeping occupation,” in which Russia takes just a bit of Georgian land at a time, drawing very little attention to itself.

Each one of these acts is a blatant violation of international law, and the occupation now has become so domineering that approximately 20 percent of Georgian territory lies under Russian control.

Nevertheless, Georgia actually declared a “non-use of force” pledge, meaning that it only sees a diplomatic outcome in regaining control of the two territories. Russia has failed to reciprocate this pledge.

The bottom line is that the decision to sell these weapons is great news for Georgia, and the U.S. should continue to arm and enhance those capabilities. We should do so not only for Georgia, but for all of our allies—for the sake of America’s national security and prosperity.