Why Ending US-South Korea Joint Exercises Was the Wrong Move 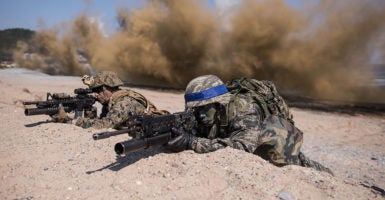 The Trump administration made a decision that could weaken U.S. and South Korean readiness in a conflict with North Korea.

On Saturday, the Pentagon and South Korea’s Ministry of Defense announced an end to the joint military exercises that both countries normally partake in each spring. As justification, the Pentagon cited its “desire to reduce tension and support our diplomatic efforts to achieve complete denuclearization of the Korean Peninsula in a final, fully verified manner.”

This is the wrong decision for the wrong reasons.

Until now, the large U.S.-South Korea joint exercises had only been suspended. That was a questionable decision, but at least plausible given that nuclear negotiations with North Korea were actively underway.

But this announcement is different. It permanently cancels the exercises. It comes on the heels of last week’s Vietnam summit between President Donald Trump and Chairman Kim Jong Un, which resulted in no forward progress toward denuclearization—making the Pentagon’s justification even more inexplicable.

The exercises, called Foal Eagle and Key Resolve, were designed to “increase readiness to defend South Korea, to protect the region, and to maintain stability on the Korean Peninsula.” Foal Eagle involves field exercises, and in past years has involved over 10,000 U.S. troops and 290,000 South Koreans. Key Resolve is a computer-driven exercise designed to train headquarters staffs and has included 12,000 Americans and 10,000 South Koreans.

Both exercises had been conducted for decades.

The U.S. and South Korea had postponed all joint exercises since the June 2018 Singapore Summit, where Trump announced that he was suspending “war games” while nuclear negotiations were ongoing. He tweeted, “Holding back the ‘war games’ during the negotiations was my request because they are VERY EXPENSIVE and set a bad light during a good faith negotiation. Also, quite provocative.”

A typical exercise costs around $14 million—not a trivial amount, but necessary in order to practice military coordination with allies and iron out the wrinkles that inevitably emerge in complex military operations. In Korea war plans, U.S. and South Korean forces are fully integrated, and that coordination demands constant rehearsal.

Many credit much of the success of the 1991 Operation Desert Storm in Iraq to the exercises conducted in 1990 by U.S. Central Command, which practiced sending forces to the Persian Gulf.

As The Heritage Foundation’s Korea expert Bruce Klingner has written, “President Trump’s decision to cancel allied military exercises has been the gift that keeps on giving for North Korea. Washington and Seoul have cancelled at least nine military exercises, including Freedom Guardian, Ulchi, Taeguk, two allied Marine Exercise Program exercises, an artillery exercise in the West Sea, land and sea drills in the East Sea, Vigilant Ace, and Foal Eagle.”

The best military is of little value unless it is properly trained. And by cancelling, not just suspending, these exercises, the U.S. is unilaterally lowering its readiness.

Last month, the commander of U.S. Forces in Korea, Gen. Robert Abrams, testified that he is busy modifying exercises in Korea to reduce their “size, scope, volume, and timing” in order to “remain in harmony with diplomatic and political requirements without sacrificing warfighting readiness to unacceptable levels.”

But Abrams also reported that he has detected no similar modification in the North Korean military’s training cycle, stating that “we have observed no significant changes to size, scope, or timing of their ongoing exercises.” So essentially, only the U.S. is altering its training regime.

Canceling the spring exercises based on cost is a false economy. Doing so in the face of an unchanged North Korean training cycle and undiminished North Korean nuclear capabilities is misguided.

Why the most powerful nation in the world would cancel the very exercises that guarantee its readiness with a key ally, in order to please a dictator like Kim, is a mystery.