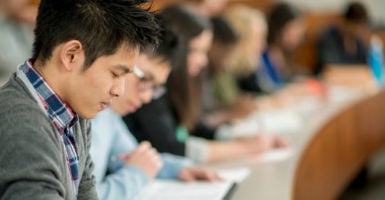 On average, Asian-Americans must score 140 points higher on their SATs than white students to be equally considered for admission to elite colleges. (Photo: iStock Photos)

Helaina Hirsch is a member of the Young Leaders Program at The Heritage Foundation.

Michael Wang stared at the letter in dismay.

It marked the sixth Ivy League university he had been rejected by, out of the seven he had applied to. In addition to his perfect ACT score and grade-point average, he was ranked third nationally in piano, sang at President Barack Obama’s inauguration, and had received accolades in many debate competitions.

When Wang realized that people with lesser qualifications than his were getting accepted by the Ivies, he suspected that something else was afoot: It wasn’t his qualifications keeping him from his dream, it was his Asian last name.

That explains why in May 2015, he, along with 64 Asian groups, filed a complaint with the federal Department of Education against Harvard University, which is now under investigation for its affirmative action policy.

Article VI of the Civil Rights Act prohibits educational institutions that receive federal aid from discriminating based on race. Owing to allegations of discrimination advanced by Asian-Americans, the Justice Department has asked Harvard to produce documents that will help shed light on its admissions process.

Racial preferences in university admissions first arose in the late 1960s, when its supporters said they were needed to remedy a history of discrimination against African-Americans. In 1978, in California Board of Regents v. Bakke, the Supreme Court used twisted reasoning, rejecting racial quotas as unconstitutional, while affirming the permissibility of considering race in admissions.

Since then, the high court has edged closer and closer to banning racial preferences as distasteful and un-American, but hasn’t brought itself to completely eradicate them.

But now we are seeing how racial preferences also can hurt a minority group; namely, Asian-Americans. That’s why a number of Asian-American special-interest groups filed suit in federal court in May 2015, complaining that Harvard and other selective institutions of higher education employ veiled racial quotas in their admissions procedures.

These groups point to the fact that, on average, it is much more difficult for Asian-Americans to gain admission to elite schools than it is for their Hispanic, black, or white counterparts.

One study measured the considerable difference in SAT and ACT scores within highly selective universities and examined what factors allow certain low-scoring applicants to get into those colleges.

Since the ACT is measured on a 36-point scale, the difference in points is considerable. For example, a score of 27 places a student in the 86th percentile nationally, while a score of 23 bumps a student down to the 69th percentile. Especially in a competitive admissions process, such a difference can greatly affect a student’s chance of acceptance.

Among all racial groups, Asian-Americans are most “underrepresented relative to their application numbers,” according to the Asian American Coalition for Education. Although in 2008, Asians comprised more than half of “highly qualified” applicants to Harvard, only 17 percent received acceptance letters. Despite their rise in population, the percentage of Asians at Ivy League institutions has stagnated at about 18 percent.

Absent racial preferences, the Hispanic acceptance rate at elite institutions would drop to half its current rate, while black acceptance would plummet by two-thirds. By contrast, the number of Asian acceptances would rise from 17.6 percent to 24.3 percent.

Given these statistics, Asian interest groups fear that race amounts to more than just “one factor among many” in admissions processes. The Supreme Court has explicitly prohibited the practice of considering a student’s race to be a “defining feature of his or her application.” Instead, the court found that race must remain merely one consideration in a “holistic” evaluation of the individual applicant.

The Justice Department intends to discover whether the admissions difficulties Asian-Americans face result from a policy at Harvard that is “indistinguishable from racial quotas.” To do so, Justice has asked for access to documents that reveal the details of Harvard’s admissions procedures.

Harvard has been wary of producing records that contain information about students’ test scores and demographics.

The Justice Department indicated that Harvard’s proposal is promising, but it is still reviewing whether the university’s proposal complies with Article VI access requirements.

If proven that Harvard and other elite schools use policies that disproportionately consider race, these institutions should not continue to receive federal funds.

We will never eliminate discrimination by enacting policies that limit the opportunities of one race in favor of another.