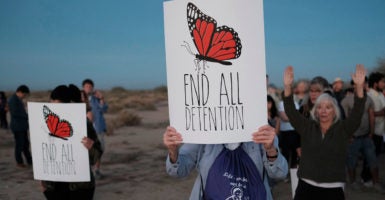 The permanent injunction follows a preliminary ruling, issued in April, in a suit filed by the city of San Francisco and Santa Clara County.

“The Counties have demonstrated that the Executive Order has caused and will cause them constitutional injuries by violating the separation of powers doctrine and depriving them of their Tenth and Fifth Amendment rights,” U.S. District Judge William Orrick for the Northern District of California wrote in his order.

The Justice Department argued in April that the executive order would have a relatively limited financial impact on the municipalities and later appealed to the 9th U.S. Circuit Court of Appeals after Orrick ruled against the administration.

“The District Court exceeded its authority today when it barred the President from instructing his cabinet members to enforce existing law,” Department of Justice spokesman Devin O’Malley said in a statement late Monday. “The Justice Department will vindicate the President’s lawful authority to direct the executive branch.”

Orrick argued statements made by Attorney General Jeff Sessions and Trump indicate the executive order was intended to impact a broad swath of funding, up to $2 billion, according to the plaintiffs.

At issue is the Immigration and Customs Enforcement policy of asking municipalities to detain suspected illegal immigrants for up to 48 hours so the individual can be picked up. Numerous cities in New York, Los Angeles, and Chicago have drawn the ire of the Trump administration over their insistence on requiring a valid criminal warrant in order to detain someone until the federal authorities arrive.

Chicago also sued the administration in August due to similar threats of reduced funding in response to noncompliance with immigration law. A federal judge ruled in favor of the city in September, issuing a preliminary injunction preventing the administration from cutting off public safety grants.