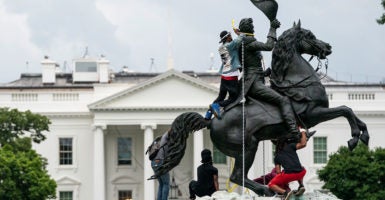 The manager of a small town in Ohio has declared his municipality a “sanctuary city” for statues being toppled in other parts of the country.

A proclamation signed July 4 by Newton Falls City Manager David Lynch declares that monuments of the Founding Fathers and others will find safety in Newton Falls.

“I, David M. Lynch, as City Manager for the City of Newton Falls do hereby proclaim that Newton Falls shall be known as a ‘Statuary Sanctuary City’ welcoming statues rejected by other cities across the United States and also proclaiming a general amnesty for George Washington, Abraham Lincoln, Thomas Jefferson, Ulysses S. Grant, Patrick Henry, Francis Scott Key, Theodore Roosevelt, and Christopher Columbus as represented by statues removed all across the United States,” his proclamation reads.

Newton Falls, Ohio, is a town of about 4,500 people some 60 miles east of Cleveland.

In the six weeks since the death of George Floyd in police custody in Minneapolis on May 25, protesters have torn down or attempted to tear down statues of Confederate Gen. Robert E. Lee; Grant, a Union general-turned-president; and even Presidents Washington and Lincoln, among others.

While acknowledging that the country is not perfect, the proclamation calls for respect for all that America has achieved to end injustices, such as slavery.

“The great leaders of our country and Western civilization, though flawed in many ways, have risen to great achievement, such as the founding of our nation, the ending of slavery, establishment and protection of our national parks, the establishment of antitrust laws to protect our citizens from overaggressive monopolization of industry, and the discovery of the New World itself,” the proclamation reads.

An online petition, dubbed “No Sanctuary for Racist Statues,” has since been launched to render Lynch’s proclamation “null and void.”

Werner Lange, a resident of the town, launched a petition on MoveOn.org, saying, “We resolutely reject the proposed denigration of our fair town into a mecca for racists and their ilk, and declare this shameful proclamation null and void. We shall overcome.”