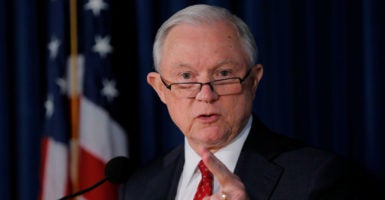 Attorney General Jeff Sessions has grown accustomed to stormy congressional hearings, but when he goes before a House committee Tuesday, much of the grilling is likely to come from an unusual source—Republicans.

“Losing a presidential election as Hillary Clinton did does not render immunity from public scrutiny,” @RepMarkMeadows says.

Numerous Republicans have expressed frustrations about why the Justice Department, which Sessions runs, hasn’t delved into Russia-related scandals surrounding Hillary Clinton, the Democrats’ 2016 nominee for president, such as her campaign’s funding of the so-called Trump dossier and the Uranium One controversy. They also want the Justice Department to pursue questions about the Obama administration’s “unmasking” scandal.

Sessions will testify before the House Judiciary Committee.

“The American people are demanding that there be one standard of the law, not a double standard,” Rep. Jim Jordan, R-Ohio, a member of the Judiciary Committee, told The Daily Signal in a phone interview Monday evening.

“This is about the American people getting answers for things that happened in the Justice Department in 2016 and early 2017,” Jordan said. “We asked for a special counsel months ago, and we know so much more now.”

Rep. Trent Franks, R-Ariz., another member of the committee, said there is more evidence of wrongdoing with regard to Clinton than with anything special counsel Robert Mueller has unearthed about President Donald Trump.

“I absolutely believe Attorney General Sessions should appoint a special counsel to investigate the Clintons and [the] Democratic Party’s potential criminal ties to Russia,” Franks told The Daily Signal in an email, adding:

The difference between this special counsel and the Mueller investigation is that there is incontrovertible evidence of a potential crime, where the pursuit of Trump is a political witch hunt that has a demonstrable lack of evidence of anything remotely criminal.

The House Judiciary Committee’s oversight hearing, set to begin at 10 a.m., will almost surely include heavy criticism and questions from Democrats about alleged collusion between the Trump presidential campaign and Russian officials. But Republicans also have come out strongly against Sessions for not investigating Clinton.

Jordan and Gaetz conclude: “It’s time for Jeff Sessions to name a special counsel and get answers for the American people. If not, he should step down.”

The Jordan-Gaetz op-ed also calls for a probe into how the Justice Department investigated Clinton’s private email server—which she used for official business as secretary of state—and a new Justice Department probe of the revelations that Obama administration officials “unmasked” individuals. The term refers to the internal identification of Trump associates whose activities supposedly were captured incidentally during routine U.S. intelligence-gathering.

“We should absolutely strive to hold our public officials accountable, regardless of their political party—and at the same time, losing a presidential election as Hillary Clinton did does not render immunity from public scrutiny when there are major questions regarding your actions in office,” Meadows told The Daily Signal in an email.

Meadows, who isn’t a member of the Judiciary Committee, spoke last week about the Clinton matters on the House floor.

In his statement to The Daily Signal, Meadows added:

The fact is, there are a number of serious questions about the Clinton Foundation, the Uranium One deal, the creation of the Russian dossier—all of which call into question whether our national security was compromised while Hillary Clinton served as secretary of state and later ran for president. Ignoring those questions just because the Clinton campaign wasn’t successful would be a disservice to the American public. The American people deserve and demand answers to those questions. It’s our government’s responsibility to find them by appointing a special counsel to investigate.

For his part, Trump has called for an investigation by his Justice Department into his vanquished opponent, although a year ago in the immediate aftermath of the election, he said he wasn’t interested in hurting the Clintons.

Never seen such Republican ANGER & UNITY as I have concerning the lack of investigation on Clinton made Fake Dossier (now $12,000,000?),….

“Clinton campaign & DNC paid for research that led to the anti-Trump Fake News Dossier. The victim here is the President.” @FoxNews

Republicans have argued this constitutes more direct evidence of collusion with Russian officials than anything known about the Trump campaign.

Separately, the House Permanent Select Committee on Intelligence and House Oversight and Government Reform Committee are probing the Uranium One deal. Clinton was a member of a board of federal officials that approved the 2010 deal that gave Russia control of 20 percent of American uranium, which can be used for nuclear power.

The Hill news organization reported that the FBI was investigating the matter at the time as a potential bribery and kickback scandal, and that Russian nuclear officials routed millions of dollars to benefit the Clinton Foundation, the organization set up by former President Bill Clinton, his wife Hillary, and their daughter Chelsea.

Jordan previously said Mueller, the special counsel and former FBI director, should recuse himself from the Russian probe because he is compromised based on his inaction in the Uranium One sale.

A Justice Department spokesman declined to comment before Sessions had a chance to speak for himself Tuesday at the House committee hearing.

This story was updated to include comments from an interview with Rep. Jim Jordan.