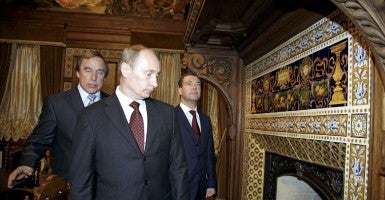 Dmitry Medvedev and then Vladimir Putin with Sergei Roldugin. Roldugin is at the centre of a scheme in which money from Russian state banks is hidden offshore. (Photo: Sputnik/Reuters/Newscom)

As The Atlantic has reported, “[d]isclosures from the Panama Papers are rocking the global political elite.” Although not all of the activities alleged in the papers may ultimately be determined to be unethical or illegal, it is instructive to look at the connections between many of the people named in the papers and the scores of their countries of origin on The Heritage Foundation’s “Index of Economic Freedom” corruption indicator.

The Atlantic reports that “three of Prime Minister Nawaz Sharif’s four children …used shell companies to buy property in London.” The 2016 edition of the “Index for Economic Freedom,” published annually by The Heritage Foundation and The Wall Street Journal, rates Pakistan as “mostly unfree,” with a score of 55.9. It ranks 131st out of 178 countries on freedom from corruption. A Heritage Special Report on Pakistan in 2015 noted that corruption afflicts “all levels of bureaucracy.”

As The Guardian reports, a “$2 billion trail leads all the way to Vladimir Putin. The Russian president’s best friend—a cellist called Sergei Roldugin—is at the centre of a scheme in which money from Russian state banks is hidden offshore. Some of it ends up in a ski resort where in 2013 Putin’s daughter Katerina got married.” The 2016 Index overall rank for Russia is 153rd out of 178 countries: “Corruption is pervasive. Small elites control the bulk of the nation’s assets, and state institutions have been corroded.”

The BBC reports that “Ukrainian President Petro Poroshenko says he did nothing wrong, after leaked documents suggested he had set up an offshore company as a tax haven using Panamanian legal firm Mossack Fonseca.” Ukraine’s Freedom From Corruption ranking in the 2016 Index—148th out of 178 countries—is even lower than Russia’s.

As the 2016 Index notes, corruption reflects a systemic failure of public and private integrity that distorts the economy and “enables individuals or special-interest groups to gain at the expense of the whole. Often a direct result of the government’s concentration of economic or political power, corruption manifests itself in many forms such as bribery, extortion, nepotism, cronyism, patronage, embezzlement, and graft.”

Let’s hope the bright light shining from exposure of the Panama Papers leads citizens around the world to demand more transparency and honesty from their leaders.