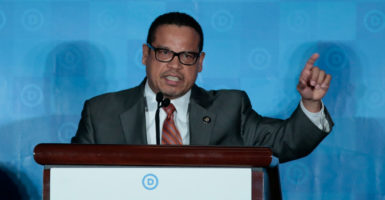 The denial by Rep. Keith Ellison that he knew of Democrats' funding of the so-called Trump dossier is reminiscent of the top party official's insistence that he had not heard of a former information technology aide's being the subject of a federal criminal investigation. (Photo: Chris Berry/Reuters/Newscom)

Rep. Keith Ellison, D-Minn., deputy chairman of the Democratic National Committee, said he was unaware of the party’s funding of the so-called Trump dossier assembled to knock out the eventual Republican nominee during the 2016 presidential campaign.

Ellison’s assertion to The Hill of his lack of knowledge about the Trump dossier echoed those of the party’s former national chairman, Rep. Debbie Wasserman Schultz, D-Fla., and sources close to Democratic presidential nominee Hillary Clinton.

The denial is reminiscent of Ellison’s claims to have not heard of House Democrats’ former information technology aide, Imran Awan, despite being repeatedly informed of a major federal investigation involving him.

In both the Awan and Trump dossier affairs, Democratic leaders have said they did not have knowledge of major events that greatly concern them.

Investigators contend that Awan and family members gained unauthorized access to House computer servers thousands of times and funneled massive amounts of data off the network shortly before the 2016 presidential election. The Awans potentially could have read the data of 1 in 5 House Democrats.

House Minority Leader Nancy Pelosi professed unfamiliarity with the Awan investigation, despite playing an important role in the handling of the case months ago as one of the House leaders who determined it warranted a criminal probe.

“I’m not familiar … I haven’t followed that so closely,” Pelosi said in May, when asked about Imran Awan’s continued employment by House  Democrats. “We’ve been busy with a lot of other things.”

Pelosi, however, was one of the House leaders who “agreed to refer the probe to Capitol Police and the FBI” in October 2016 after the House inspector general said the Awans “could be reading and/or removing information,” The Washington Post reported.

When The Daily Caller News Foundation asked Pelosi about the situation and her commitment to cybersecurity in September,  she walked away.

Other Democrats contend they did not look into the Awan matter despite the data security and corruption implications, with some members making seemingly contradictory statements or  implying there never was an investigation into cybersecurity and procurement issues.

After the Pakistan native’s arrest made national headlines in July, Ellison said, “I don’t even know about this arrest that you say happened, and I don’t know the person you’re referring to.”

However, The Daily Caller News Foundation had brought the matter to the attention of his congressional office and the Democratic National Committee, asking for comment in February, March, and July.

“I get that you’re following me all this way, but even if you follow me all the way to my office, I’m not going to suddenly know something,” Ellison said in July when asked about the possible cybersecurity breach.

Given that the Democratic National Committee itself was the victim of a cyberbreach and that a staffer for dozens of elected officials had just been arrested, it is not clear why a top party official would have never heard of it, and why his staff would not have informed him when receiving questions about it from the media.

Ellison had in fact discussed the case before, saying in May: “I’m at a massive disadvantage because I don’t really know the issue at all.”

The Awan family is also suspected of running a ghost employee ring in which most workers did not actually show up.

Since 2014, the IT person on the payroll of Rep. Emanuel Cleaver, D-Mo., was Rao Abbas, who worked at a McDonald’s and lived in Imran Assan’s basement. Cleaver paid Awan himself only $200 in a decade.

“Imran was the guy who worked in our office, I don’t know this other guy,” Cleaver said in June, referring to Abbas.

Despite the obvious discrepancy—someone not on the payroll of Cleaver’s office apparently had been logging into his computers and he was paying someone he didn’t actually see—Cleaver did not express alarm or curiosity.

“Some people say it’s because he’s Muslim that he’s being railroaded. … I don’t know enough about it,” Cleaver said.

The Missouri Democrat said it never occurred to him that IT workers had access to emails.

“Emails?” he asked. “You mean the one from the election?”

Rep. Ted Deutch, D-Fla., also was paying Abbas, the McDonald’s employee. Deutch said he’d look into the issue and discuss it, then later refused to do so.

Rep. Joaquin Castro, D-Texas, a member of the House Permanent Select Committee on Intelligence, said he was not aware of any suggestion of such impropriety on Capitol Hill, although despite this reporter sent detailed information about it to Castro’s office in person and over email in previous weeks. His office appears to have taken no steps to tell Castro about the information or act upon it.

“The only thing I’m aware of is that he’s being charged with bank fraud,” Castro said. “Do you have evidence that there’s anything more than a bank investigation?”

Awan’s lawyer has said the only reason prosecutors found out about the alleged bank fraud is because they were looking into Awan because of the underlying House-related investigation, which saw him banned from the chamber’s computer network.

“Wasserman Schultz said the [Democratic lawmakers’] chiefs of staff were told that Awan and his family members were having their access to the House IT network cut off because they were under investigation for ‘procurement violations and data transfer violations,’” reported The Sun-Sentinel, the main newspaper in Broward County, Florida.

Politico reported in February, after Democrats from the House Administration Committee briefed lawmakers’ chiefs of staff, that the IT employees “allegedly stole equipment from members’ offices without their knowledge and committed serious, potentially illegal, violations of House IT policies.”

There was no suggestion of mortgage fraud until months later, when prosecutors hurriedly assembled an indictment for a financial crime to prevent Imran Assan from leaving the country.

The FBI arrested Assan at Dulles International Airport outside Washington, where he was trying to board a flight to Pakistan. Much of the activity described in the affidavit associated with his arrest did not occur until after Assan was banned from the House computer network.

Democratic members of congress who employed the Awans have not said they took any action to review their data security, with some saying they were unaware of any reason to do so.

The Administration Committee’s ranking Democrat is Robert Brady of Pennsylvania. Jamie Fleet, the top staffer, did not respond to a request for comment.