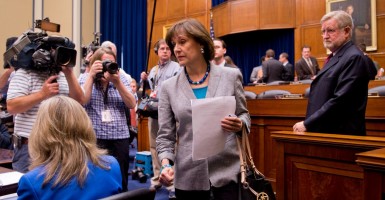 Lois Lerner, former director of exempt organizations for the Internal Revenue Service, at a House Oversight and Government Reform Committee hearing on the investigation of the IRS's targeting of political groups. Lerner invoked her Fifth Amendment right to not testify.(Photo: Tom Williams/CQ Roll Call/Newscom)

Lerner, the former IRS official who is at the center of a scandal involving the targeting of conservative groups, claims in a newly-released email that Abraham Lincoln is the worst president in the nation’s history.

In an email responding to a friend, Lerner wrote, “Look my view is that Lincoln was our worst president not our best. He should (have) let the south go. We really do seem to have 2 totally different mindsets.”

Arguing that Lincoln is not the greatest U.S. president is perfectly reasonable. But to claim he is the very worst president in our history is something else entirely.

Historians commonly rank Lincoln if not our best president, somewhere alongside George Washington, Franklin D. Roosevelt, Thomas Jefferson, and Theodore Roosevelt. This is no accident.

Lincoln saved the Union, freed the slaves, and brought the country back in line with Constitution and the principles of the Declaration of Independence.

Prior to departing for the nation’s capital, Lincoln declared in his Farewell Speech that he faced “a task…greater than that which rested upon Washington.” When he assumed office in March 1861 (prior to the passage of the Twentieth Amendment, newly-elected presidents were not sworn in until March), seven states had already seceded. Eleven states in total would eventually secede.

As president, Lincoln worked hard at keeping the border states on the side of the Union or at the very least stay neutral. He dealt with a revolving door of inadequate generals (one of whom ran against him in the Election of 1864) until he selected Ulysses S. Grant to command the Union army.

Lincoln issued the Emancipation Proclamation as a prudential war-time measure, whose principles culminated in the ratification of the Thirteenth and Fourteenth Amendments.

As Lincoln’s great English biographer Lord Charnwood observed, he “refused to preserve the Union by what in his estimation would have been the real surrender of the principles which had made Americans a distinct and self-respecting nation. Those principles he found in the Declaration of Independence.”

Rather than fighting to keep the Union whole and eventually abolish slavery, Lerner thinks that Lincoln should have let the South secede and become a separate sovereign nation.

First of all, letting the states secede would have all but destroyed the Constitution and the “more perfect Union” it was intended to put in place.

As Lincoln and the Founders understood, the Union is a compound republic made up of state and federal governments—not a compact between separate sovereign states.

The Constitution was ratified by the people acting through state ratifying conventions and not by the state legislatures. Individual states then have no constitutional right to leave the Union at will.

Furthermore in his First Inaugural, Lincoln argued that perpetuity is implicit in the very logic of government. Not only is there is no constitutional right to violate the Constitution, “no government proper, ever had a Provision in its organic law for its own termination.”

If Lincoln had assented to the principle that the losers of an election could break up the Union, he would have violated his constitutionally mandated duty to “preserve, protect and defend the constitution of the United States.”

It seems Lerner would have evidently been fine if the Constitution—even a “living Constitution”—was cast aside.

Even worse, chattel slavery would have undoubtedly continued for decades longer in the new southern nation—probably well into the twentieth century.

In a country based upon the fundamental truth that all men are created equal, it took almost 90 years after the end of reconstruction (which formally concluded in 1876) for blacks to gain the full benefits and privileges of citizenship.

In the southern confederacy, which in the words of its vice-president, Alexander Stephens, was founded on the “physical, philosophical, and moral truth” that “the negro is not equal to the white man,” it is likely this moral progress would have taken far longer.

So much for liberal compassion.

In poll after poll Americans think that Lincoln was the greatest American president.

Lois Lerner should rise to their level of understanding and spend some quality time studying the statesmanship of our greatest president.