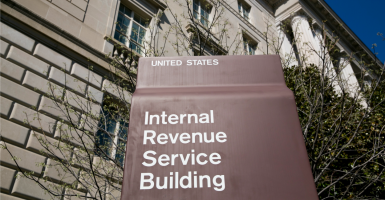 Allegations surrounding the IRS targeting issue surfaced in 2013 when it was revealed the IRS was targeting conservative organizations applying for tax-exempt status. (Kris Tripplaar/Sipa USA/Newscom).

A report released on Thursday morning by the Government Accountability Office unveiled that the Internal Revenue Service specifically audited organizations in a biased manner.

“The control deficiencies GAO found increase the risk that [the Exempt Organizations unit] could select organizations for examination in an unfair manner—for example, based on an organization’s religious, educational, political, or other views,” the GAO report stated.

Allegations surrounding this issue surfaced in 2013 when it was revealed the IRS was targeting conservative organizations applying for tax-exempt status.

Despite these findings, the IRS has denied organizations were targeted.

“Although the report states that a hypothetical risk exists that returns could be selected unfairly, the draft report did not find any evidence that this has happened,” said the IRS in a statement.

Additionally, John Koskinen, commissioner of the IRS, said in a congressional hearing with the House Ways and Means Committee on Thursday, just hours after the report was released, that no bias was evident in the report.

“I would note that the GAO’s report on the criteria we use to select exempt organizations for audit found no evidence of organizations being selected in an unfair or biased manner,” Koskinen said.

Koskinen added that one of his top priorities since assuming his position as commissioner of the IRS has been to ensure those who interact with the IRS will receive fair treatment, regardless of political affiliation or their stances on political issues or candidates.

In response to Koskinen and the IRS’ statements, House Ways and Means Subcommittee on Oversight Chairman Peter Roskam said in the hearing that this was not the case. “As we will show today, that’s just not true. The Inspector General tells this committee they have referred multiple cases of improper audit selection to the Justice Department for criminal prosecution in 2014 alone,” Roskam said. “There’s nothing hypothetical about that.”

Roskam noted that the GAO report identified multiple examples where the IRS did not adhere to its own internal controls and failed to document decisions concerning which organizations or individuals were audited.

According to Roskam, this is a serious concern because without proper documentation, it is challenging to determine whether an audit was requested “based on merit or bias.” Ultimately, Roskam said the lack of documentation hinders accountability.

At the hearing, several leaders of organizations who were audited by the IRS testified, including Michelle Easton, president of the Clare Boothe Luce Policy Institute (CBLPI), and Joseph Metzger, vice president of finance at the Leadership Institute. Both organizations are 501(c)3, conservative non-profits.

Easton said that as president and a former attorney, she had always been cautious to adhere to the IRS’ rules for tax exempt organizations. She said she was aware of the “horrors” several other conservative organizations had endured as a result of an IRS audit.

“I was confident I had done everything I was supposed to do,” Easton said.

Even so, in January of 2011, CBLPI was contacted by the IRS and was “selected for examination” for fiscal year 2008. The IRS agent never informed Easton why CBLPI was selected—the only explanation given was the IRS wanted to verify CBLPI was following the necessary requirements as a tax exempt organization.

Because of this, Easton said she never believed the IRS randomly selected CBLPI due to the lack of information provided by the IRS.

“If the great majority of IRS audits are truly random, as the IRS claims, the IRS should publish on Jan. 1 a list of all the groups and individuals that they plan to do these random audits on through the year,” Easton said. “Then, we could see if the audits are truly random, or whether they are focused on those nonprofits which oppose the policies of the incumbent administration.”

Metzger noted that had the IRS given the Leadership Institute an “adverse ruling,” the organization would likely have lost their tax exempt status. He said this would have dramatically impacted the future of the organization.

“For a non-profit organization, this destroys any possibility of future funding from foundations, and it significantly discourages donations from individuals who would no longer enjoy tax deductibility of their contributions,” Metzger said. “In many ways, that is equivalent to a death sentence.”

Metzger outlined the various costs that the audit had imposed on the Leadership Institute, including the legal expenses, which totalled nearly $50,000, and the time staff members devoted to responding to the IRS. But the audit placed an even greater, intangible cost on the organization as well.

“Wondering whether or not you said something you weren’t supposed to is pretty scary, especially when the consequence of an error of speech is the potential death of the organization,” he added.

Roskam said the IRS must make appropriate changes to ensure biased auditing does not occur in the future.

“The IRS must acknowledge these problems and take concrete action to ensure a Lois Lerner 2.0 situation cannot happen,” Roskam said.